Smith to start from second row of the grid 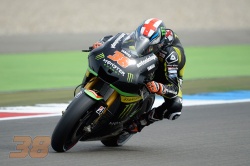 There was plenty to be proud of on the opposite side of the Monster Yamaha Tech 3 garage this afternoon after Smith’s heroics ensured he will start from the second row of the grid for the first time in his premier class career.

Still troubled by pain and discomfort from a recovering left wrist injury he sustained in Mugello recently, Smith brilliantly powered his YZR-M1 machine to sixth position with a best time of 1.35.454.

He managed to knock over a second off his pace in nine breathless laps and like Crutchlow he saved his best to last and he will sit alongside Valentino Rossi and Dani Pedrosa on the grid for Assen’s unique Saturday race.

Today’s result was easily the 22-year-old’s best in MotoGP qualifying after he had previously started ninth on the grid in Qatar and Le Mans. After racing to a career first top six at the last round in Catalunya, Smith is confident he can produce another strong race tomorrow to strengthen his challenge for a place inside the top 10 in the World Championship standings.

Bradley Smith 6th 1.35.454 – 9 laps:
“Sixth position is a fantastic achievement and I am really happy. With Ducati not performing well at this track I took advantage of that situation and to be only one second away from pole position is also great. Starting on the second row gives me a good chance to follow the factory guys and also Cal if I can. The biggest goal for the race will be to learn as much as I can from racing against the very best in the world. I am expecting a tough race though because Assen is a really physical track and for my wrist it will not be easy to do 26 laps. I want to thank the Clinica Mobile staff again because they have done an awesome job in helping me be as comfortable and pain free as possible. I am feeling more confident with the bike and we found a good base for this track. I’m really excited to see what I can do in the race and congratulations to Cal on his pole position. He’s been riding awesome all season and today we saw once again just how strong the Monster Yamaha Tech 3 Team is.”