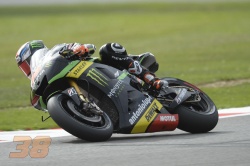 Rookie Bradley Smith will start his first home MotoGP race from inside the top 10 after he was able to set encouraging lap times throughout the weekend that bodes well for a strong challenge in tomorrow’s Silverstone showdown.

Smith advanced comfortably from QP1 with a lap of 2.03.110, which saw him dominate the opening 15-minute qualifying session by close to a second.In the heat of battle in QP2, the 22-year-old further improved his pace to an impressive 2.02.409, which was only 0.3s away from securing Smith a place on the second row of the grid for the third time this season.

Bradley Smith 10th 2.02.409 – 7 laps:
“My lap time is something to be really proud of today because we made a big jump compared to the rest of the weekend. The overall result is not what we expected but going into QP1 showed we have been having a tough weekend. So to end up close to the top six is positive but that gap to the front is obviously a big step. I still believe we can make another step with the bike for tomorrow. It will be a long race but it might be an advantage to be able to follow and learn something because on this track it seems easier to chase than make a lap time on your own. It has not been an easy weekend but I’ve not made any mistakes and got faster every session, so I am looking forward the race and rewarding the amazing support from the British crowd.”