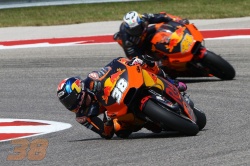 The Red Bull KTM MotoGP Factory Racing Team wrapped up a difficult race weekend at the Circuit of the Americas on Sunday in the third round of the 2017 MotoGP World Championship. Factory rider Bradley Smith finished 16th on this long, 5.5km circuit, KTM teammate Pol Espargaro retired mid race after experiencing clutch problems.

It was the team’s first visit with the KTM RC16 MotoGP bike to the difficult Texan circuit, and represented another stage in their steep learning curve as they tackle their first season in the premier class.


Bradley Smith (Factory Rider MotoGP):
“It was a tricky day with tire choice. When the sun came out we were a bit worried about whether the soft tire would really work, and we had done the majority of our work on that tire choice. The hard tire was okay when we had grip but then we had problems when it slowly disappeared. I was a bit nervous when I saw Pol’s bike smoking and after that, I just tried to look after the bike and the tires. I started to push a bit to see if I could stay in front of Bautista but he was stronger than us. In the end I just tried to finish the 21 laps to get some important information for the team. We always knew that this race was going to be a difficult one for us. I’m proud that we were able to have a bike that could do one fast lap, now our objective is to move forward and make one that does 21 laps.”


Mike Leitner (Team Manager MotoGP):
“This was a typical track where we were for the first time, and we ran out of time to make any really big steps on the bike setting, and to test everything to be competitive. We have to take it like it is because we will face this problem a few more times this year. With Pol we had an issue with the clutch, which caused an oil leak and this is why the engine was smoking. Now we just have to accept it and keep working to make it better.”