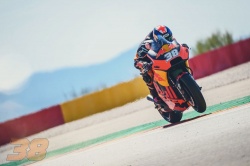 MotoGP cooked in sweltering temperatures for the fourteenth round of nineteen and the third time on Spanish soil in the 2018 campaign. The fast and undulating curves of the MotorLand Aragon circuit drew a good crowd and another tight contest that was ruled by reigning world champion Marc Marquez for the third year in a row.

Red Bull KTM were disappointed to lose Pol Espargaro after a crash in FP3 yesterday that meant further surgery on the Spaniard’s recently repaired left collarbone. The accident prompted Bradley Smith to again fly the orange flag alone on the KTM RC16 and to work through set-up choices for the 23 lap race where tyre preservation would be key in track temperatures that easily entered the 40s.

Smith made his customary bright start and was pushing Valentino Rossi hard for tenth place – a standing he occupied for three laps – but was powerless in the second half of the distance to resist a charging Maverick Viñales and Franco Morbidelli. With 13th position Smith made sure of grand prix points for the third time in the last four outings.


Bradley Smith (Factory Rider MotoGP):
“This weekend has been a lot of fun. It was our second with the new RC16 package and we were able to test here a month ago, which meant we were already up to speed with our base setting and electronics. It was nice to fight with the guys for Q2 and my one-lap pace with the soft tyre was quite strong. At one point in the race today I was running P10 which is one of the best positions for us this season. I was strong in the first half of the race and then when the tyre dropped I struggled a bit more compared to the others around me. Nevertheless we’ll take a lot of positives from this weekend and we improved from Misano. Now the engineers and I have to study what we gathered from this race and bring some ideas. Randy de Puniet will now test here for two days and hopefully he can find a few more tenths to take overseas with us.”


Mike Leitner (Team Manager MotoGP):
“Bradley did a great job on a tough weekend where we lost Pol on Friday; it is always a bit harder to work with just one rider in terms of the settings. Until the middle of the race Bradley was able to fight for the top ten inside that group and this was good. For Pol, he has had surgery straightaway and we hope his recovery will be fine and quite fast. We hope to see him back on the bike but we will keep a close eye on his healing process with an eye towards Thailand.”Red Bull KTM will now continue 2018 and 2019 development work with a two day stint at Aragon on Tuesday and Wednesday with the test team and Randy de Puniet.


MotoGP will make a maiden appearance around the distinctive layout of the Chang International Layout in two weeks for the first Grand Prix of Thailand.