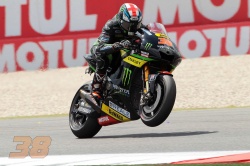 Bradley Smith produced another strong display in the Netherlands to seize 7th position after becoming involved in the tussle with his teammate that went right to the finish flag. The 24 year old rider commenced the 85th Dutch TT from 12th on the grid and produced a solid start to battle his way up to 8th at the fall of the first lap. Then Smith stuck into his race rhythm and rode consistently as he sought to close in on the group in front.

The Brit remained calm and made steps forward before diving past Pedrosa on the 16th lap to seize 8th. With seven laps remaining, he tried to overtake his teammate, yet unfortunately ran off the track in the process and slipped back to 9th. However, Smith soon recovered the distance and was back in the middle of the battle for 5th. He powered onwards before reclaiming 8th on the 23rd lap and then geared up for the final sprint around the 4.5 kilometre circuit. Here he jumped up a place and after speeding out of the iconic Geert Timmer Bocht chicane he was less than a hairs breadth to Cal Crutchlow in what was a spectacular finish to the Motul TT Assen where he just missed out on 6th position by 0.069.

Bradley Smith: – Position: 7th – Championship: 6th – Points: 77
"Overall, I am pleased to walk away from the Assen track with another solid finish even though it was hard work in this race. It was especially difficult behind the Honda and Ducati bikes as they have to be ridden in different styles when compared to the Yamaha, so it wasn't easy at all to find my way through. To be honest, it was a bit of shame that I qualified in 12th yesterday as I definitely felt that I had the bike underneath me which was strong enough for 4th position. In the second part of the race, I tried to pass Pol with around eight laps left to go, but I ran off track and then had to move back through the group all over again. I thought that I could have overtaken him and then broken away so it was a pity that I ran wide. Nevertheless, beating two factory bikes was great, especially as it was in one on one battles, so I’ve got to be pleased with my performance. Also the top satellite bike was only two bike lengths in front, which means we have been competitive again. I must say thanks to the team for the great job and I look forward to getting back on my Yamaha M1 at Sachsenring."

Hervé Poncharal - Team Manager:
"It was yet again a very strong race result for the Monster Yamaha Tech3 Team. Both Pol and Bradley had good starts and were involved in the incredibly tough battle for 5th throughout the whole race, plus they also passed each other several times. Both were fighting with factory riders, such as, Iannone first and then Dovizioso, Pedrosa and Aleix Espargaro who all fought and passed each other throughout the 26 lap sprint. Pol managed to finish ahead of this group even though he had a lot of pain in his right arm and I’m very glad that he was able to complete the race in this position. I’m really happy for him, especially after his DNF at his home round and I’m sure that this result comes at a perfect time for him and his whole team because they have worked very hard. Bradley was right there as well and at some point of the race he was even setting the fastest times of the entire group. Yet unfortunately, at this track it’s not easy to pass. The bottom line is that we leave Assen with a 5th and a 7th which is another positive finish for both guys. Pol was the first satellite rider, plus we are keeping our dream alive as we are just eight points behind Repsol Honda in the team championship and finally, I also want to congratulate Valentino on another incredible victory. Tomorrow our two riders are flying to Suzuka, so I hope they can recover and also sleep well on the plane and we trust to have them back strong at the German GP.”