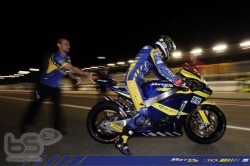 Cal Crutchlow and Bradley Smith made superb respective MotoGP and Moto2 debuts under the floodlights in qualifying for the CommercialBank Grand Prix of Qatar this evening.

Crutchlow despite considerable pain from a damaged little finger will make his MotoGP debut tomorrow from the third row of the grid at the opening round of the 2011 MotoGP World Championship after qualifying in ninth place.

Smith makes his Moto2 debut also from the third row after qualifying in seventh place while the British youngsters all qualified for the opening round of the 125 cc World Championship.

Twenty-five year old Crutchlow damaged his little finger when he crashed the Monster Tech3 Yamaha in testing earlier this week but despite the pain put in a superb one hour qualifying session finishing in front of Valentino Rossi and his own team-mate Colin Edwards.

Twenty year old Smith was equally impressive in the very competitive Moto2 class also riding for the French-based Tech3 Racing team He finished three places in front of Gloucestershire teenager Scott Redding who had mechanical problems at the start of the session. Scotsman Kev Coughlan was 33rd.

Danny Kent led the Brits in the 125 cc class qualifying in 13th place with Scottish teenager Taylor Mackenzie 20th. Kent-based Danny Webb gave the Indian Mahindra team a real chance of some points on their grand prix debut after qualifying 23rd. Brave Harry Stafford was five places behind despite riding with a broken hand sustained in an earlier testing crash.