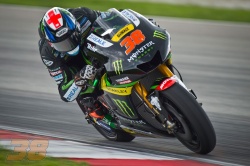 ​The Monster Yamaha Tech3 team pair concluded the opening test positively as they worked determinedly on their preparations for the 2016 season. Smith and Espargaro rode tirelessly for three days as they thoroughly examined the new Michelin tyres, the electronics package and their updated version of the Yamaha YZR-M1 for 2016. Both riders will now leave Malaysia positive and fully confident for the next test at Phillip Island.

Bradley Smith focused on completing as many laps as possible as he studied the effects of the Michelin tyres and the new electronics package over race distance. He completed 65 laps today with his total for the three day test being 179 laps, which was more than any other MotoGP rider. The 25 year old rider was also the only rider to sample the Michelin intermediate tyre after a heavy downpour of rain during the day. His time of 2’01.107 from yesterday’s session left him in 10th in the combined standings after finishing only 0.048 behind his teammate today, marking a solid effort at the opening test.

Bradley Smith: – Position: 10th –Time: 2'01.107 –Laps: 179
"It’s been a good three days and we completed 99% of what I wanted to test which is a positive conclusion. I set a lap time that I was happy with yesterday, so today I decided to focus on race simulations and the handling of the bike when on a full fuel load. This was important as this season we are going to 22 litres of fuel that, of course, makes the Yamaha behave a bit differently compared to last year. We also thoroughly worked on the electronics in order to keep as much grip as possible when the tyre drops and by doing a race simulation today, I got to sample this first hand as well as learn the tyres behaviour in more depth. The results have given the team a clear indication of what they need to improve, and obviously, Yamaha can look at the data I’ve gathered so I am sure we can take advantage of this before we go to Phillip Island. I also tried the intermediate tyre today, which I had done in Brno as well, but this one was a different spec and it was closer to a full slick tyre. It obviously worked better in the wet conditions, but it’s no solution for real rain. It’s a bit of a gamble at the moment but I gave some information to Michelin and it will be interesting to see what happens in the future. Altogether it’s been a great three days and we leave Sepang with a clear direction of where to go next in order to progress. Already, I feel as comfortable as I did last year from a setting point of view and there’s still six days left to test.”