Tech3 fired up for season opener after positive final test 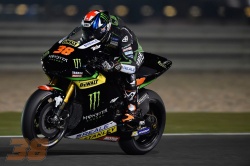 ​Monster Yamaha Tech3 team rider Bradley Smith completed the final preseason run out today with an encouraging performance which leaves him confident for the approaching first race of the 2016 MotoGP World Championship in Qatar.

Smith dug deep as he completed a mammoth 62 laps, whilst continuing in making alterations to his Yamaha YZR-M1. The end result saw the confident Briton finish just 0.084 behind his teammate, leaving him optimistic of his ambitions to complete the opening Grand Prix inside the top 8.

Bradley Smith: – Position : 13th – Time: 1'55.966 – Laps : 114
"We closed the test positively today, but all in all the pre season 2016 has been quite different compared to other years. It’s been an interesting process where we’ve had to get used to the new tyres, as well as to judge their evolution because we’ve had some different front and rear tyre specs to evaluate. I must say that learning to adapt the bike to these different compounds has been a challenge. Some parts of the pre season have also been frustrating for me because of the time the weather took from us in Australia, and also the tyre situation a bit here in Qatar and as a result, we weren’t able to extract the maximum from the available testing time. Nevertheless, we are within touching distance of our target, which I think will be inside the top 8 this year. I still believe that we have a bike that’s only at 90% so there’s room to improve and we are always getting closer. Yet, going into the start of the season, I’m confident that we can do a good job. This evening’s test was positive as I improved my time quite a lot and we had consistent pace. Also, I was able to go out and ride quickly immediately which is something that I was struggling with on these tyres but I figured that one out today. I’m excited to complete the testing and finally get into racing mode as the competition brings out a bit of extra pressure which some people like and some don’t. For me, I like to be put under pressure and I feel I perform better in that way, so roll on the start of the season and FP1 in a few weeks’ time.”