Tech3 primed for opening round battle in Qatar after solid qualifying 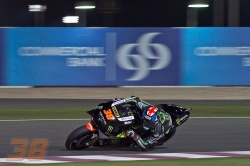 ​Bradley Smith pushed hard and produced a tireless qualifying assault today that will see him commence the Qatar Grand Prix from 11th on the grid. The 25 year old had to battle through Q1 after just missing the direct qualification to QP2 by only 0.029 yesterday, but he wasted no time and graduated straight through to the second session after setting a 1’55.490. Here, he upped his pace before firing a personal best lap which was just a tenth from his teammate. The British star now confidently awaits the 22 lap sprint tomorrow where he aims to fight for a top eight result.

Bradley Smith: – Position: 11th – Time: 1'55.414 – Laps: 7
"I am pleased with my qualifying position today even though it was a different experience on the Michelin tyres compared to Bridgestone. I knew that we wouldn’t be challenging for any of the top positions, so I made the decision to stay out on the bike in QP2 in order to get a few more laps under my belt as well as figuring out several things for the race. All in all, I am satisfied that we are in and around the other satellite riders which ranges from 8th to 12th, so with a good start, we can be right in the mix. With regards to the setup, we are still trying to adjust some details, but I did a full race distance on a set of tyres and was still running competitive lap times. This is positive, however, we need to work something out for sector three and four, but particularly the third. The Yamaha’s strength is corner speed which is something we need to improve on as I don’t quite have the confidence to lay it into the corner, release the brake and go through. Therefore, this is what I need in order to make the difference, so we will study the data and go from there. A top eight position is achievable but we need to work hard between now and then. Having said that, I am excited for the first race of the season tomorrow and will give it everything I’ve got.”