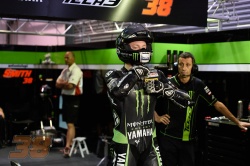 Monster Yamaha Tech3 rider Bradley Smith concluded his pre-season testing today at the final session in Qatar. Smith optimised the track time to finish the test, feeling optimistic ahead of the opening MotoGP race on the 23rd March.

British rider Bradley Smith completed a successful pre-season today at the Losail circuit having worked relentlessly in preparation for the first race. Smith explored different options on his Monster Yamaha Tech3, Yamaha YZR-M1 across the testing period, and leaves the track feeling confident and with his intentions firmly set for 2014. He continued today with finalising some small changes to the geometry of his MotoGP bike as well as running race simulations. Despite having a small fall at the beginning of his long run in the latter stages of the session, the young British rider was uninjured and completed 55 laps in total. Smith finished in 3rd place, with a best time of 1:55.027.

The opening race of the MotoGP 2014 season begins under the floodlights on the 23rd March at the Losail Circuit, Qatar.

Bradley Smith – 1:55.027 – 3rd:
“Overall, I am really pleased with how the winter went for us. Today at Qatar, we decided to do a race simulation at 10:00pm which we thought was the best time to compare to the race weekend.  We made some alterations midway through and I was able to go out again with the same tyres in the final fifteen minutes. I am feeling happy with what was achieved here and this means that we are definitely hitting the ground running. The next step is just some slight fine tuning. The desert is always a bit unpredictable but we are prepared. We have done a lot of very good laps, and I am really excited for round one”.

Herve Poncharal – Monster Yamaha Tech3 Team Owner:
“This test has once again proved that we are at the start of a very exciting Championship with many riders fighting for the top positions, and I’m glad to say that we are among them. Pol and Bradley both did a very good job during the pre-season, with each of them having different aims. Pol needed to adapt as quickly as possible to the bike, and he still has a long way to go, but I’m sure he will give us great pleasure doing the season and surprise us at some races. Of course he has been unlucky to crash in such an unfortunate way and hurt himself, but with the determination he has shown so far there is no doubt that he will be back here for the race and ready to give his all. Bradley on the other hand, used the various test sessions to improve different aspects of the bike which he was struggling with during the last season. When we look at his race pace at the moment, we are confident in saying that he did a great job. So, I’m really pleased and satisfied with the work of the whole team and we are all looking forward to the moment when the starting lights turn green on this track, in two weeks”.