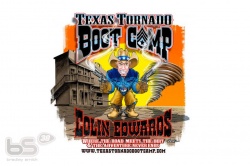 After the recent news that two-time World Superbike champion and current NGM Mobile Forward Racing MotoGP rider Colin Edwards (#5) is to retire at the end of the season, it seemed very fitting that Bradley (#38-#42), along with his younger brother Cortnie (#27) spent some time at the Texas Tornado Boot Camp after the Red Bull Grand Prix of The Americas.

The smith brothers were in good company as they were joined by fellow brits Scott Reading (#45) and Gino Rea, along with AMA Pro Road Racing/AMA Pro Dirt Track rider JD Beach (#95) and 2-Time AMA National Flat Track Champion Jake Johnson (#05) and a host of other riders.