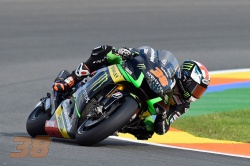 Bradley Smith will contest in the final race of the 2014 season one place behind his teammate, in 7th on the MotoGP grid after undertaking a strong ride in qualifying today. The British star began his day at Valencia by finishing in 10th position in the morning having used the session to complete further adjustments to the setup of his Yamaha YZR-M1.

His best lap was 1’31.469 and resulted in him being only three tenths from the front row. Smith continued his forward momentum into the qualifying and concluded the 15 minute shootout with a top result of 1’31.324, leaving him at the head of the third row for tomorrow’s race. His time was a blink of an eye behind his teammate by only 0.017 and he will seek to conclude the race as the leading satellite bike in the final round.

Bradley Smith: – Position: 7th – Time: 1'31.324 – Laps: 9
"I am pleased with the qualifying result today as it is a solid place to start the final Grand Prix from. The conditions on track were quite tough and with a lot less grip compared to last year. Plus the wind really picked up this afternoon and was quite aggressive, particularly into the first corner. I finished with a time that was close to Pol’s and I believe that is why our team works so successfully together as we have been battling since 2005 so we know each other very well. I finished 0.4 of a second from the pole and I qualified ahead of Aleix who, along with Pol, is the contender to my target of landing 6th in the championship standings. So overall, the result today leaves me in quite a promising position for tomorrow and I look forward to the battle in the 30 lap sprint at Valencia."