Top 10 for Smith in Germany 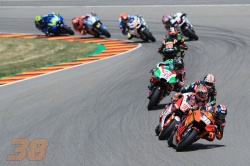 The ninth round of 2018 MotoGP at Sachsenring in Germany was a memorable one for KTM across the Grand Prix classes.

Both #38 and #44 pushed for the best possible start on the twisty layout and to gain the most positions once the red light went out. Sadly Pol’s race latest only a matter of seconds after he tagged Andrea Iannone entering Turn 3 and crashed, taking Alex Rins with him into the gravel. Smith was the sole KTM RC16 pilot and entering the second half of the race was holding 10th place, around 20 seconds down on leader Marc Marquez. Smith made sure of his top ten ranking, collected 6 points and toasted his best result of 2018 to-date.


Bradley Smith (Factory Rider MotoGP):
“It was nice to be able to get the result that we knew was there and we’ve had that potential all season. For some reason or another Sundays have been the disappointing days, particularly in Assen two weeks ago where I felt I could have done a similar job as today. We have to be happy and we worked hard all weekend. I was able to hold with (Dani) Pedrosa and (Johann) Zarco for a long time and regrouped after a small mistake. I could then pull away from Hafizh and bring home some good points; six in fact after only scoring seven all season. Finally a good finish and we were able to show where the KTM can be.”


Mike Leitner (Team Manager):
“We again showed that we are making progress. Being fastest in warm-up is not just a gift from the others. We went into the race very confident because of Pol’s speed and Bradley’s race pace from FP4 so it was a shame we lost Pol on the first lap because we were expecting the top ten with him. In the end we were very happy that Bradley achieved the goal; this is a great result for him, the team and the factory. We should take the positives from this race and we’ll think during the summer break how we can improve for the second half of the season.”

MotoGP enters a small summer break with two free weekends before the series gathers together again at Brno for the Grand Prix of Czech Republic on the first weekend of August.