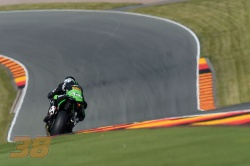 Bradley Smith produced a spirited display today to seize 9th position on the grid, which will see him contest the race from the third row. The British rider bounced back impeccably from a fall in FP3 to set a best lap time of 1’22,001, seizing 5th and promoting him straight through to Q2. He continued to stride forward to set a best time of 1’21.794 before an unlucky late fall, preventing him from ascending any higher up the grid. Nevertheless, the lap by the 23 year old British star was only 0.3 behind the fastest Yamaha Factory rider and Smith remains primed for what will be a closely fought grand prix tomorrow where he confidently intends to finish with a top tier result at round 9 of the 2014 MotoGP world championship.

Bradley Smith: – Position: 9th – Time: 1'21.794 – Laps: 6
"Today was another eventful day and in all honesty, I’m a little frustrated as we had the potential to easily qualify on the second row. I had a fall this morning which could have been much worse, but I managed to save it as best as I could. However during the incident, the foot peg went into the front of my leg and I needed stiches, so of course this was a far from perfect start. Still, I did my best and this afternoon the Yamaha felt really good. Unfortunately, I pushed a little bit too hard too early on turn 3 and 4 where we have been fast all weekend but the limit was reached that time. It’s a pity especially as the start is really important at this narrow track. Now I need to get a good rest to be in the best possible condition and I still remain confident that we will be able to fight for a strong result tomorrow afternoon."