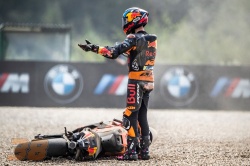 Red Bull KTM Factory Racing Team went into the tenth Grand Prix of the year at a hot Brno circuit optimistic of their race pace with the KTM RC16 and with the knowledge that a bright start would see Bradley Smith and Pol Espargaro challenging the top ten of the premier class.

Espargaro was focussed on making key final tweaks to his set-up in the morning warm-up session but his day and weekend was wrecked by a fall after just eight laps. The Spaniard was given medical treatment and a broken collarbone meant he was ruled out of the 21-lap sprint later in the afternoon. The team are waiting for a more detailed diagnosis of the injury but #44 will return to Barcelona on Monday morning.

Smith launched away from the fifth row of the grid and was determined to be in the heart of the action in the opening throes but ended up in the gravel trap with Stefan Bradl and Maverick Viñales after the German’s overtaking move on Turn 3 skittled the other two. Smith will now recalibrate his efforts towards the post-Grand Prix test on Monday.


Bradley Smith (Factory Rider MotoGP):
“It was very frustrating but it has to be expected back there when everybody is jostling for position. The whole weekend was super-tight again. I was braking into Turn3 and Stefan took a lunge up the inside and tucked the front. His bike slid into mine and then I slid into Maverick and we all went down. We’ll have a lot to do now in the test and I’ll have a busy day but we got through a lot of stuff this weekend anyway. We still have a long list and I’ll be first out on track tomorrow and the last to leave.”


Mike Leitner (Team Manager):
“Not a good weekend for us. We’re happy that Bradley is OK after his crash and I think it was not his fault. His front wheel was taken by Stefan’s bike. This is just a part of racing and we know this category is very tight. We were worried about Pol. He had a big crash this morning. He is lucky he did not hurt himself more and the only clear information we have at the moment is that he has a collarbone fracture, although we don’t know yet how complicated it is. He will go back to Barcelona tomorrow morning for further checks and we can then make a plan.”