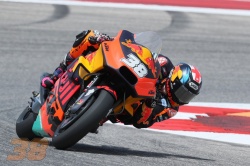 The third round of nineteen in 2018 MotoGP at the quick and flowing Circuit of the Americas in Austin, Texas saw Red Bull KTM Factory Racing’s Pol Espargaro score 13th position while Bradley Smith just missed the points in 16th.

The KTM RC16s of both Bradley Smith and Pol Espargaro lined up next to each other on the fifth row of the grid for the twenty lap dash around the long, arduous and bumpy COTA layout. Smith made an excellent leap once the red light disappeared and was briefly holding a top ten spot while Espargaro had to work to make ground from fifteenth. From lap eight the KTMs had a great tussle for a mid-pack slot until Smith’s choice of a medium front tyre resulted in #38 having to slow his pace. Pol guided his #44 machine to 13th and a second points-scoring classification in a row that leaves him 14th in the young championship standings.


Bradley Smith (Factory Rider MotoGP):
“It was a good weekend and I felt like I had some pace especially in the beginning where I made up three positions and was fighting with Jorge (Lorenzo). We took a gamble: Pol went with the soft front tyre and I went with the medium and with these temperatures I thought it would work but it just went off and there was nothing I could do. I held-in there until lap twelve and then it was understeering everywhere. I knew it might happen… but was hoping it didn't! This is all part of the learning experience and figuring out what works with this motorcycle and how to improve. It is a bit frustrating to come away without any points but things were looking up this weekend so we have to be happy with that.”


Mike Leitner (Team Manager MotoGP):
“To be fair this track is already difficult for other manufacturers that have been in this business for a long time and it was hard for us last year. It is a long, hard and bumpy layout. You need a very balanced bike to make a fast and stable lap-time and somehow we managed to give Pol something to take 13th position and we should be happy with these points. We’ll head back to Europe now and look to keep-on improving.”


MotoGP will now travel back to Europe. The Circuito de Jerez in Andalucía will launch the European phase of the FIM World Championship in two weeks time.