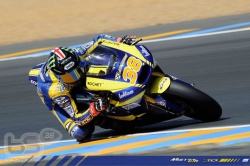 Bradley Smith was cruelly denied his chance to claim a deserved top 10 position on the grid ahead of the all-important home race for the Tech 3 Racing Team in Le Mans this afternoon.

The British rider was poised to improve on his best time of 1.39.223 when he was caught up in an incident at the fast first corner with Spanish rider Axel Pons. Smith looked a certainty to secure his third top ten grid position in four Moto2 World Championship races when Pons crashed in the braking zone for the first corner. Unable to take evasive action, a blameless Smith collided with the machine of Pons and tumbled into the gravel.

Smith was unhurt but the incident meant Smith was unable to rid e his Mistral 610 machine in the final seven minutes and he could only watch in frustration as he dropped down the rankings to 17th position. The speed Smith has demonstrated throughout the weekend though shows he is more than capable of fighting for the top ten in tomorrow's 26-lap race.

Bradley Smith 17th 1.39.223 – 17 laps
“The big frustrating part of today was that I did not get to take the advantage of the new tyre. We had a real consistent bike and I was confident I could improve my times with the new tyre. But then I had the accident with Axel Pons and there was absolutely nothing I could do about it. These things can happen in qualifying when people are pushing hard to improve at the end of the session and unfortunately today it was my turn to have the bad luck. We'll never know how much I could have improved because I didn't get chance to complete the last three laps. But I think I've shown already this season that I am quite strong at the end of qualifying when you need to produce a fast lap. I just need to get a good start from 17th and make up some places on the first couple of laps. It is a long race and this is definitely an overtaking circuit. You just have to be aggressive but pick the right moment. I feel confident, so I just don't need to make any stupid mistakes.”