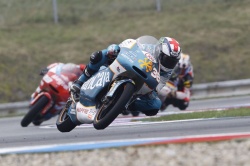 Back after a break, little had changed since Germany for the 125cc riders on track. The start of the Sunday race at the Czech Republic was once again thrown into disarray by rain, as this time the start was delayed due to a downpour two minutes before the scheduled take off. Race Direction changed their classification of the contest from a dry to a wet race, and the teams responded by putting on wet tyres. The problem came when the track dried over the course of the race, but Nico Terol proved to be the best at handling the tricky conditions.

Bancaja Aspar's Nico Terol was returning to action after a nasty injury picked up at Montmelo, and proved that he had lost none of his sharpness with a runaway win. He clocked the fastest time on Friday, headed the timesheets for most of the weekend and took off swiftly and effectively in the race itself. A series of hot laps took him away from his rivals, allowing him to take less risks later on. He almost cruised to the line to take the 25 points and winner's trophy, victorious for the second time this season and the second time at Brno. The championship is still a possibility.

Bradley Smith had looked like challenging Terol when he took pole position on Saturday, but he had grip problems on the early laps of the race that put paid to his chances of victory. He found his form as the track dried, but it was too late for the Briton to get onto the podium and he finished sixth.

6th Bradley Smith: "To tell the truth, it was a pity how things turned out today. I was totally convinced that I had everything in place to have a good race, but things started to go sour on the grid. It was hard to know what decision to make, but we went for wet tyres on the dry setting. I had big problems with grip at the start of the race and had to take risks on every corner, which lost me positions. When the track had dried completely ten laps before the end, I started to pick up the race pace. I am disappointed because we were on top all weekend and could have had a win, but the weather knocked us off balance. This isn't the result that I wanted from Brno, but at least I can say that I gave my all. We know what happened and now have to get back on form for Indianápolis."