Another determined ride for Tech3 at Qatar on day 2 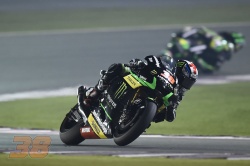 He completed a vast quantity of laps in preparation for the season’s opening MotoGP race on the 23rd of March. The weather conditions were once again perfect. The track’s grip levels were not ideal at the beginning of the day and were initially worse than yesterday, but as the day progressed, the traction improved.

The Monster Yamaha Tech3 Team and Bradley Smith continued to experiment with slight changes to the geometry of his Yamaha YZR-M1 MotoGP bike. The British rider’s tireless work over the previous tests at Sepang has brought him a setup which he is content and confident with.  The Monster Yamaha Tech3 rider was pleased with the bikes performance on used tyres and therefore with the race set up and will now aim to work on the qualifying setup .Today, Smith completed 62 laps and finished the session in 4th place, with a best time of 1:55.627.

Bradley Smith – 1:55.627 – 4th:
“Today we worked mainly on the rear end of the bike, and just tried to improve on the overall best lap which we definitely found a direction with. I am quite excited for tomorrow as we have several ideas which we will run through, and I still believe there is more that we can improve with race pace, even though it is already really good.  If we can start to do some mid and low 55’s, that would be great and is really where we expect to be. We found that we wanted to continue and improve on the new tyres as well as the old ones and I am happy with how the bike performs on either tyre at this stage, so that is really positive for the race.  We’ll then work a bit on the qualifying setup and then finally a race simulation“.