Aprilia prepares for a return to racing 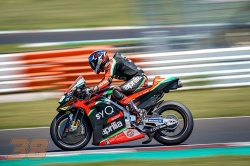 While waiting to resume a World Championship that actually never really officially began, Aleix Espargaró and Bradley Smith shared the track in Emilia-Romagna with a few protagonists of MotoGP and the factory derivative series. One of them was Lorenzo Savadori, first busy with the development of the RSV4 1100 he’ll be using in the Italian Championship and then swinging a leg over the 2019 RS-GP on the third and final day.

This series of tests was fundamental, both to pick up the thread that had been interrupted after Qatar and to give the riders a chance to prepare physically for a rather intense calendar, which will have them busy from July through November with very few breaks. All this was under the summer sun of Misano, which allowed riders and technicians to take full advantage of the time available, but which also put their resistance to the test.

At the end of the three days, the best of the 183 laps Aleix turned stopped the clock at 1'32.932, the fastest of any rider on the track. On the other hand, it was 207 laps for Bradley Smith, who will be subbing for Andrea Iannone for the early laps on the calendar, with a best time of 1'33.536. Also noteworthy was a crash on the “sweeper” for the English rider, but without consequences.


Bradley Smith:
"I’m honestly pleased at the end of these tests. I had to make a physical and mental step to go from tester to rider and I think I managed, especially on this last day. Right now, it is fundamental for us to gain experience on this new bike, gathering data and understanding how it reacts. While the base setup proved to be good straight away in Malaysia and Qatar, there are still many aspects that we need to explore in order to exploit the full potential of the new project. On my part, I know that I still have room to improve and Aleix’s performance demonstrates as much, but the gap has shrunk and I feel much more at ease taking the 2020 RS-GP to the limit."


Romano Albesiano - Aprilia Racing Technical Director
"These were important tests to define the starting point of our championship. We assessed the various chassis, engine and electronics solutions, in addition to breaking in a team that is brand new in many aspects. The riders needed this test as well to get back into the rhythm after such a long stop, and I must say that I saw them improving day after day. The decisions in view of Jerez have been taken. Many of the new features we had prepared worked well and I am rather pleased with the overall level of the bike. In any case, there is still a lot of work to do on the details, especially to increase overall reliability. We say it every year, but it isn’t wrong to do so: the level of the championship has gone up even farther and that pushes us to make an even greater effort."