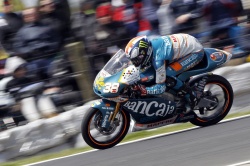 Wind and cold temperatures continued to be a prominent feature of the Australian Grand Prix on race day, with the riders considering themselves fortunate to not have rain to add to that unappetising meteorological list.  The 125cc contest began at 1am local time, and featured the usual suspects at the head of the field. Márquez escaped as predicted, Espargaró and Terol fought for second place and those three were the only riders to break the 1'38 barrier in a race with another all-Spanish podium.

Bancaja Aspar rider Nico Terol never let up in Australia, starting from fourth but having to do a lot of work to reclaim positions lost on his getaway. The Spaniard ended lap one in seventh place, although he moved up to third by the time he had crossed the line for a fourth time. He pushed hard in order to catch Pol Espargaró and reached him, but there was another fight on between Terol and the wind. The gusts and the tussle between the riders intensified with eight laps to go, but Terol preferred to settle for a podium rather than risk crashing. He remains second in the general standings -twelve behind Márquez.

Teammate Bradley Smith led the race for the opening corners, storming out of the blocks from sixth on the grid. Márquez, Espargaró and Terol got past him, however, and he became embroiled in a battle with Vázquez and Rabat for fourth place. He slipstreamed the former to apparently take fourth, but a photo finish eventually awarded him fifth.

5th Bradley Smith: "At the start I attacked hard, as I wanted to keep the leaders together. However, I wasn't able to follow Nico, Márquez and Espargaró. They had a higher top speed than me. Then I found myself in a race-long battle with Rabat and Vázquez. It was hard to find a way to beat them, because they have totally different styles and we got in each other's way. I think that the fight broke down my pace considerably. Today the feeling on the bike was very good. Even though the result isn't the best, I am happy with our race. It was a pity that Vázquez  pipped me to the line. Now we will rest up for a wekk before working towards a podium at Estoril and Valencia."