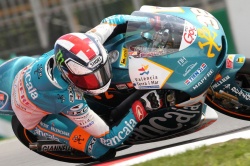 Twenty-six days after contesting the German Grand Prix the 125cc riders were back on track at Brno this afternoon, raring to go after their summer break. The top four in the championship resumed their battle with Nico Terol, Bradley Smith, Marc Márquez and Pol Espargaró the only riders to break the 2'09 barrier. Bancaja Aspar rider Terol made a remarkable return from injury, having missed the last race at Sachsenring, dominating the opening session.

Just a month and nine days after suffering a nasty back injury in Barcelona the Spaniard was back on board his Aprilia RSA today and looked as though he'd never been away. Nico moved to the top of the time sheets early in the session and progressively improved his lap times before a late surge saw him shave eighth tenths off his best effort and leave his team-mate Smith half a second adrift. The British teenager was on Nico's case for the majority of the session despite encountering a problem that he was able to resolve in the latter stages.

2nd Bradley Smith 2.08.517 (22 laps): "Today was a good day because I set a personal best lap time around this circuit, so for a first session after a three-week break I am satisfied with that. Obviously we have to improve - Nico has come back in great shape and looks really fast, so I'm very pleased for him, but our objective is to close the gap over the course of the weekend. To be honest we didn't try too many things today because our base setting is good but we have some changes to make and we know what direction we need to go in so I'm confident. We're looking for a little more rear grip but other than that I'm happy."