Best qualifying of the year for Smith 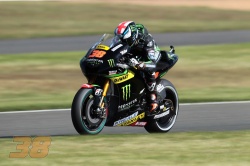 Bradley Smith continued his strong form at the Monster Energy Grand Prix de France in qualifying today and will launch from the rear of the second row in tomorrow’s 28 lap sprint around the Le Mans circuit. The British rider began the day by undertaking some additional setup work in FP3 this morning where the track conditions were much colder when compared with day 1. Nevertheless, his brilliant time from yesterday’s free practice 2, where he clinched 1st position, was strong enough for him to graduate straight through to QP2.

When rain started to fall at lunchtime before FP4, it looked like it would interfere with the Q2 session, yet the track had dried when the 15 minute shootout began. Here, Smith leapt into action straight away and powered onwards to ride a 1’33.299 lap time, confirming his sixth place on the grid which is his highest qualifying position this season. Tomorrow he will aim to undertake a flying start and then challenge for the leading satellite rider position at the Monster Yamaha Tech3 Team’s home Grand Prix.

Bradley Smith: – Position: 6th – Time: 1'33.299 – Laps: 9
"I’m really happy to be on the second row as I said at the beginning of the event that this was my target in the qualifying. However, on my flying lap, I made a mistake which probably prevented me from doing a high 1’32 lap time, so I could have been even higher, but I’m still delighted with what we achieved today. The team did a great job, especially considering the tricky conditions and we certainly made the right decision with the front tyre choice today and I felt confident. At the moment it’s a bit uncertain for everyone with regards to the race pace, however our race setting is strong so therefore I feel comfortable. This is especially important at this track because of the hard braking points and also the length of the Grand Prix. Everything went to plan today, but tomorrow is the most important day and I aim to start well and then follow the front guys for as long as possible, like I did in Austin, in order to score a great result here in France."