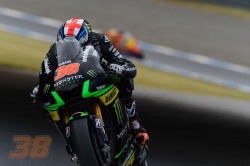 Bradley Smith completed today’s qualifying to clinch 10th for tomorrow’s race after a fiercely competitive MotoGP session in Japan. The British star began the day strongly, by finishing in 6th place in the morning practice having improved on his original FP1 time by over one and half seconds. In this session, Smith continued to work on establishing a comfortable setup on his Yamaha YZR-M1 with his Monster Yamaha Tech3 team, with his lap permitting him to sail straight through to Q2.

When the qualifying began, the British rider fought relentlessly to gain a strong starting position for the action tomorrow at the hard braking Twin Ring Motegi track in front of the passionate Japanese crowd. His hard work resulted in his time being less than three tenths from third place in the tightly contested session and tomorrow Smith will begin the 24 lap battle from the head of the fourth row as he aims to fight for the accolade of the leading satellite bike at Yamaha’s home circuit.

Bradley Smith: – Position: 10th – Time: 1'45.044
"On one hand it’s positive to be just half a second from the pole position, yet to be 10th is a little disappointing but it shows how close things have been today. I am very happy with the work we undertook as we focused on race simulation to make the bike as consistent as possible for tomorrow’s race. Furthermore, we continuously improved the lap time with the end result being much better than yesterday and I am very pleased to have been able to do a 45.0. The performance of the bike was good and the team did a great job, it’s just a shame that 10th is the final outcome despite our strong showing, but that is MotoGP. Now we will check the data and see exactly where I can improve tomorrow and I am confident in saying that we will be much higher than tenth, so I aim to get a great start and then see how well I can do. It will be a tough race at this demanding race track, but I must be as smooth as possible and make no mistakes in the first five laps, especially in the hard braking areas. I know what the Yamaha is capable of here and I have a clear plan of action so I am ready for the fight."