Bradley fired up for Motegi 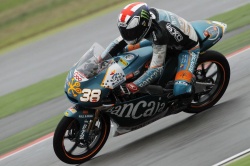 The Grand Prix of Japan returns to its traditional autumn slot this weekend following its postponement due to volcanic ash earlier in the year, tagging on to a Malaysia-Australia double header to make for three races in a row across different continents. The 125cc riders will travel all the way around the world and back in the quest to discover which of them will lift the title, with the final five races of the season taking place in just six weekends - an intense run that is sure to reward the coolest head.

Bancaja Aspar rider Nico Terol would have arrived at Motegi as the series leader had the race taken place as planned, thanks to his opening race victory in Qatar. As it is he does so after eleven rounds thanks to nine podiums and three victories - his second place finish in the most recent race at Aragón returning him to the top of the standings ahead of the final run-in. His team-mate Bradley Smith also finished on the podium in Spain and continues to be the only threat to the three Spaniards who have dominated the season so far. Although his own title ambitions are slim, Bradley will continue fighting until the battle is over.

Bradley Smith: "I am really fired up for Motegi. We were all surprised when it was cancelled back in April and personally I was disappointed because I always look forward to racing there. The podium at Aragón gave me a lot of confidence and I hope to be amongst the front guys again this weekend. Motegi is full of slow corners and hard braking so we will have to sort our engine and chassis set up out quickly. I have had good results there in the past and I feel in good shape so I hope I can have another good race this Sunday. It will be important to get a good result at Motegi to kick off the trip well and carry some good form through to the end of the season."