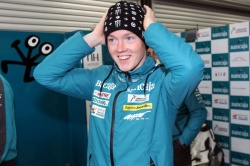 The Tech 3 Team is delighted to announce that Bradley Smith and Mike di Meglio will lead the French squad's second campaign in the ultra-competitive Moto2 world championship in 2011.

British rider Smith joins Tech 3 Racing having established himself as one of the brightest young talents in Grand Prix racing since he first burst onto the scene in 2006. He finished runner-up in the last year's 125cc world championship with two stunning victories in Jerez and Mugello. And he's guaranteed to finish fourth in 2010 after another impressive season that has seen him notch four podiums and three pole positions. The 19-year-old joins Hervé Poncharal's squad highly motivated and ready for the exciting challenge ahead having become the second British rider welcomed into the Tech 3 Racing fold following the signing of Cal Crutchlow for its MotoGP effort. Smith will begin his preparations for the 2011 season immediately after the final round in Valencia next weekend, making his debut on Monday, November 8th.

“I'm really excited and so pleased everything has been sorted out for next season. It's the next step in my career and it could not be with a better and more experienced team. I get the chance to ride the Tech 3 Moto2 bike after the Valencia Grand Prix on Monday and I can't wait. Of course I'm nervous about the next step but the Tech 3 Team have such experience and success at World Championship level I know they will really help in the transition from 125 to Moto2. It's a big step but I'm ready and I'm glad it's all sorted. It's been stressful but I always thought it would happen with Hervé Poncharal and Tech 3. I'm too big for a 125 and so the time was right for the move and I will be starting from step one once again. First I will focus on the testing in Valencia, which I'm really excited about, and then starting a new season in a new class. It will be a massive challenge and I look forwa rd to carrying on where I've left off. Moto2 is going to be a new experience and I certainly will have to learn to push to my limit in qualifying because it's absolutely vital to be near the front. I'll have to get used to a bit of rough and tumble but scrapping is something I've learnt to do in the 125 class.”

“I am thrilled that Bradley and Mike have decided to join the Tech 3 Racing Team for 2011. Bradley is a rider I have admired for a long time and I am really excited at the prospect of working with him. He has a lot of natural talent but he works incredibly hard to improve himself and I like the way he approaches racing. I am sure together we can achieve great things and I have no doubt that Bradley can be one of the top riders in the Moto2 class. I'm also very happy to welcome Mike to Tech 3. It is fitting that a French team that has designed and built its own bike should have a French rider on board. Mike has phenomenal talent, which he showed when he won the 125cc world title in 2008. I'm sure we can bring out the best in him again next season. This year was a historic one for Tech 3 Racing when Yuki Takahashi won the Catalunya race. To see a bike that you've developed with a lot of hard work and dedication is an unforgettable emotion, and I'm sure Bradley and Mike can deliver more memorable moments for us. Finally I'd like to thank Yuki and Raffaele de Rosa for all their efforts in 2010 and wish them all the best for the future. They will always be remembered as the two riders that started a new chapter in the history of the Tech 3 Racing Team, and their commitment to the project has been incredible. Their input has been vital for development of the 2011 project and I'm sure Bradley and Mike will benefit a lot from that.”