Bradley Smith, third last year and hopes to make up for Indy crash 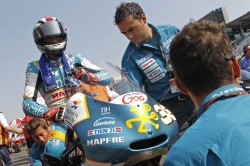 With just seven rounds remaining of the 125cc World Championship the title race is wide open, with Spanish trio Márquez, Terol and Espargaró separated by just five points after another titanic tussle at Indianapolis. The three have dominated the season so far and, with Bancaja Aspar rider Bradley Smith also sure to be fighting for wins, they look certain to maintain their stranglehold to the end of the year. The only question is which one of them will take the title.

Bancaja Aspar rider Nico Terol has returned from a mid-season injury even stronger than ever, taking back to back wins at Brno and Indianapolis. His most recent success has brought him to within striking distance of the championship lead, which he would secure with victory on Sunday regardless of other results. The only man who has looked capable of breaking up the Spanish dominance this season is British teenager Smith, who was in fine form at Indianapolis before crashing out of the battle for second place in the race. Far from letting his head drop, Bradley plans to continue to take the fight to them at Misano, where he went from pole to third last year - a result he hopes to repeat at the very least on Sunday.

Bradley Smith: "Misano is a fabulous track. Once again we were unable to round off a good weekend with a result at Indy but that just gives me even more motivation and desire to get a result at Misano. Our chassis set-up is really good but we still need to get more out of the engine to improve our performance so that's the target this weekend. Despite the crash at the last round I am optimistic because Misano is a circuit where I know we can find a good set-up and be fast from Friday. My mechanics are Italian and a lot of them are from near Misano so I'd love to get a good result for them. We'll all work very hard to make sure the weekend ends in the best way possible."