Electronics in MotoGP remain a complex and fascinating subject. To help explain them to us, we had Bradley Smith talk us through the various options at his disposal on board his Monster Tech 3 Yamaha M1. 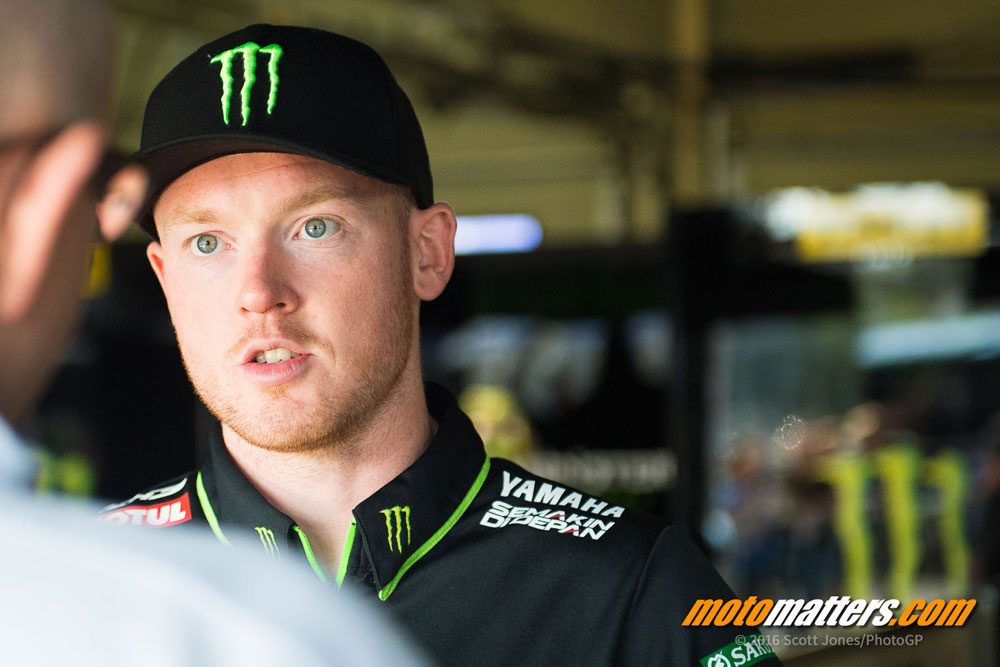 In the first part of this interview, published yesterday, Smith talked to us about the different electronics settings he has during practice and the race. In the second part, the Tech 3 rider talks us through how he and his team, under the guidance of crew chief Guy Coulon, arrive at those settings. Smith walks us through the different options available, and how he arrives at the right settings to use at a particular race track


Q: The buttons on the right hand side: pit and stop buttons?

Bradley Smith:
"So pit and stop is quite straightforward. Stop is stop, pit limiter is pit limiter. When pit limiter is on, we get some lights coming up on the dashboard. Again, it's set at an RPM that we work out is going to be 60 km/h for that track, based on your gearing. So they may have to adjust that a little bit, because the circumference of the wheels changes with rain tires and intermediate tires. So we want to make sure that in case of flag-to-flag, we have the maximum.

Also we're asked to try it all through the weekend, to make sure that we're right on that limit, because 1 km/h all of the start straight is quite a long way, so it's something we analyze quite closely. Then you bring in a bit of tolerance with the radar guns and this, that, and the other. You try and bend the rules as much as you can, but no one wants a stop and go, so you have to stay within the limits. You only go as far as what you think you can get away with." 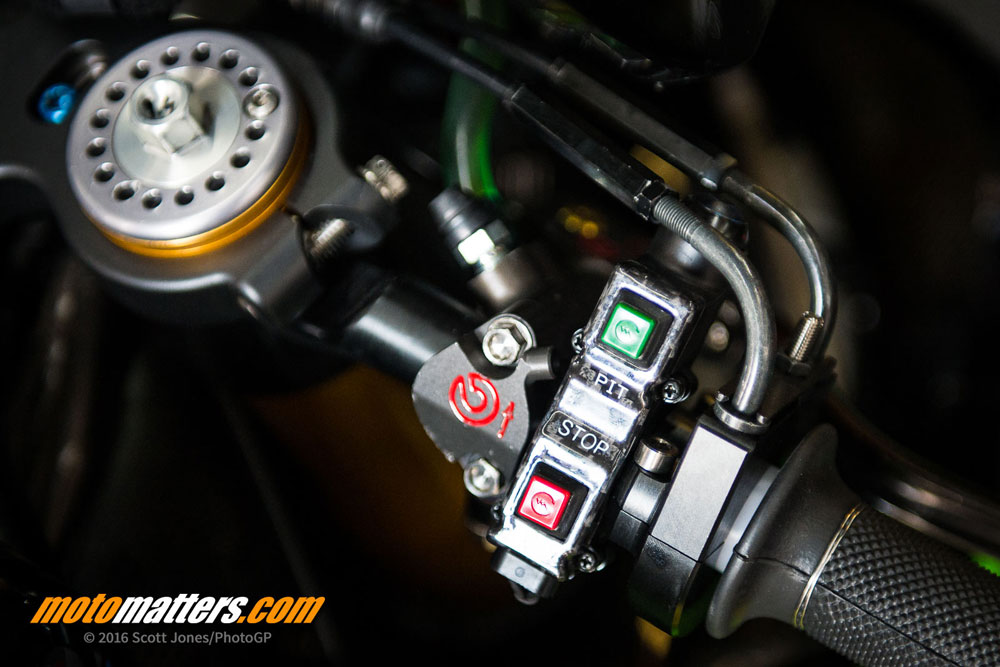 Q: Do you have different electronics map set ups for flag-to-flag races?

Bradley Smith:
"Basically, we will put an emergency switch on there, for example in switch 3. The emergency switch will be, in case we're out on slicks and it starts to rain and you go, I really need help right now, then you can go to it. I had that in Misano [in 2015], didn't use it. I used the slick setting and did everything with my right hand. But I think it all depends on the track at that moment, how much confidence you have, because in Misano, I didn't even think about it. I was so concentrated on what I was doing, I didn't even think about it, too busy trying not to fall off. It all depends on that moment. Usually in flag-to-flag, we already know if we are starting on slicks. If we start on slicks, the spare bike will have wet tires with a rain map. The rain map will be a similar scenario to what you have in the dry. So for me personally, I usually start off with the strongest TCS, and then get softer and softer."


Q: What do you mean by "strongest TCS"?

Bradley Smith:
"The strongest working. So you have to remember that TCS can work in two ways: it can work strong, or it can work a lot. So you have two ways of doing it: the spike in which it cuts, or the frequency of cuts. So you either get one really big cut, or lots of smaller ones. So it depends on the rider, or the grip, or the character of the engine. It depends on what you decide to do. So for me, strongest TCS would mean the most amount of cutting of the power to prevent slides.

So basically, we start off on the strongest, and then go weaker and weaker. Because basically, you want to start off in the safe setting and test the grip, and if the grip looks OK, you can go softer and softer. With engine braking, we probably start off with the strongest, and then go softer and softer as well. Because if the speeds come up and you start to roll through the corner, the last thing you want is a whole load of engine braking at that point and you ending up going sideways.

And then you can all do it by lean angle and bank angle: I want this number here, or this engine braking at this point, and a little bit softer there, and when I'm at that angle, I want it a little bit less, and when I go to that angle I want it more. It's a real science." 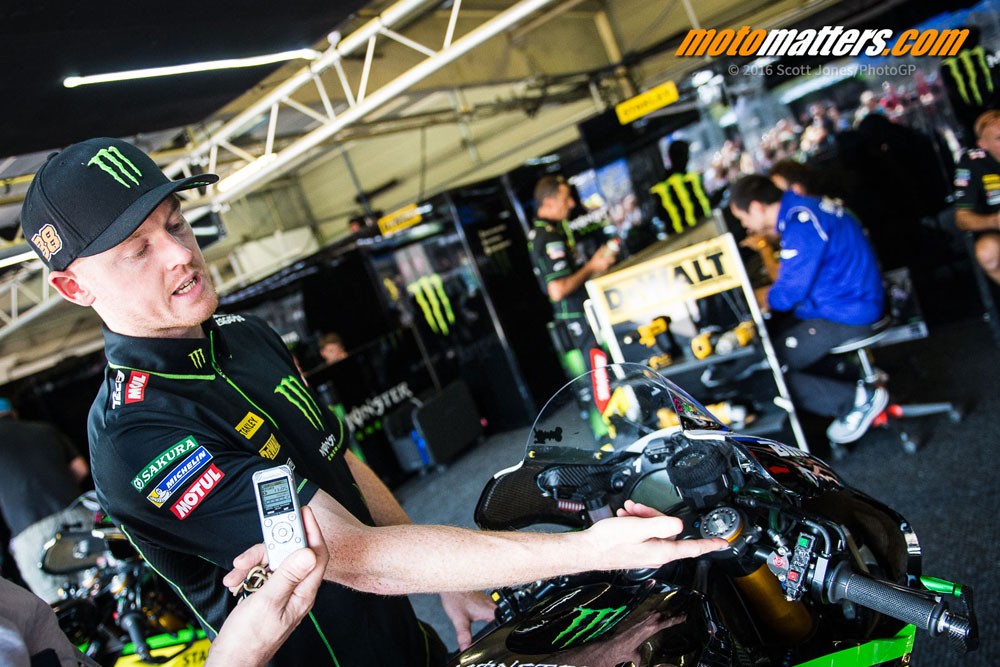 Q: So all of these variables have to be baked into a single map, and then varied between settings?

Bradley Smith:
"Yes. So that's why you see us super busy after sessions. We've seen Valentino even more so than usual through Matteo's [Flamigni, Rossi's data engineer] Instagram, doing lots of those type of meetings. Because that's finally what you're doing, you're not talking about setting any more, you're talking about dialing in the electronics. Because that's what's making the difference at the end of the day at this level.

The chassis and stuff like that, still chief mechanics and engineers are making a difference, but there's a lot of things you can overcome with the electronics, even though they've gone to a more basic system. I think the more basic system has placed even more importance on the rider and the people there. Because when it was the really sophisticated system, it was easy to do. Now it's a basic one, we have to spend more time on it and be more precise, and pinpoint it.

Which is why I believe the factory teams have even more of an advantage this season, because they have guys who are able to do it. Me as a rider, I've got to go, I've got to explain to my guy, and my guy is trying to do three people's jobs in one. So he's trying to tap everything into the system, and sometimes that's just too much to ask, it just doesn't work."

Q: Back to switching maps, do you get messages on your pit board telling you when to switch maps?

The other thing you've got to remember is that if you go too strong, you're kind of limited to what the bike does. You get to the maximum angle, you touch the throttle even a little bit, and the TCS starts to cut in. You can't turn the bike, you can't do anything. And the power only comes when you pick the bike up. So you ride around with your hands tied."


Q: So you're restricted to the speed of the bike, you can't do anything extra?

Bradley Smith:
"Yes, which is no problem at all when you are setting a rhythm by yourself, because if you're setting a fast rhythm, that's OK. But if you're in a battle, and you need to square up the inside of someone, you can't do it like that. And then you're even more tied, because you can only do what your bike allows you to do, and if the other bike accelerates away from you, you can't be creative. And one thing as a rider, when you're all doing the same lap times, sometimes you need to be creative."


Q: Any other buttons?

Bradley Smith:
"There used to be a button for lights, but because of how important it is that when the rain map get sent to the ECU, the light automatically comes in."


Q: What about the lights?

Bradley Smith:
"These are all shift lights, and this is the warning light from IRTA themselves. So anything we get from IRTA telling us red flag, black flag, those type of things, that's all we see at the moment, it's coming on that one. They're just different colored LEDs. So like blue will come up if you're a slow rider. Black doesn't come up, but some orange ones do. It's basically to do with the black flag and orange circle. It's quite sophisticated, I've looked at the actual thing, and I'm like, please narrow it down to only some! Because otherwise you get confused..." 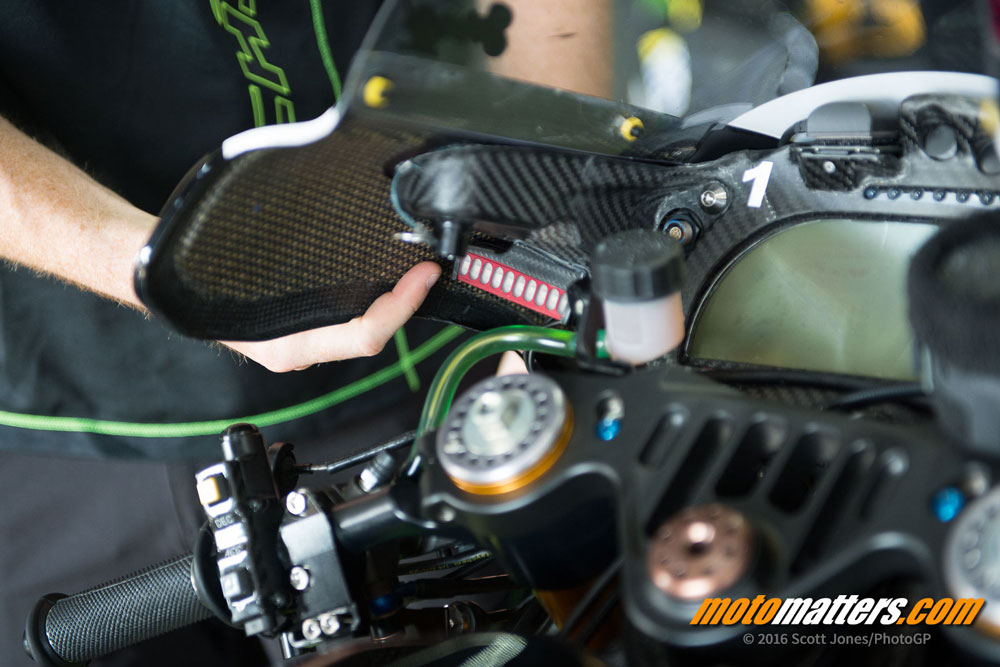