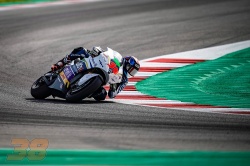 Bradley Smith ended a tough weekend at the Misano World Circuit Marco Simoncelli with an eighth place. The ONE Energy Racing rider saw his chances of fighting for a podium positions affected on the first lap after having to avoid a crash by another rider. However, the points he added to his tally this weekend take him into the double header at Valencia with his title hopes still alive.

Starting from seventh place, Smith had a great start, climbing to fifth. However, on Turn 2 of the opening lap, a fellow rider fell in front of the Briton, who was forced to take evasive action and dropped to eighth place. The ONE Energy Racing rider continued to set a strong pace, and was competing for sixth place for the rest of the race. Finally, he crossed the finish line in eighth position, claiming another 8 points.

After the San Marino GP, Bradley Smith is third in the overall standings, 24 points behind the leader. The next round for the series is at the Valencia GP, which will take place from November 15th to 17th at the Ricardo Tormo Circuit. It will host two races, which Smith and the ONE Energy Racing team go into with a chance of winning the title.


Matteo Ballarin - Team Principal:
“We were hoping for better results from these two races, but several things happened that weren't down to us. Nevertheless, we are third in the standings and still have the final two races at Valencia to come. We will have to be very strong there. We want to forget about this weekend as soon as possible and prepare ourselves for Valencia. We have to find the way to be faster. The format is tough because of the few practice sessions we have during the weekend, and with us only having six races. We will be very focused for Valencia, aiming for good results and the title.”


Bradley Smith:
"It's been an unfortunate weekend for us, but there's been no lack of effort and hard work. Yesterday we were affected by an incident involving multiple riders, and today I made a fantastic start to the race but had someone crash right in front of me. I lost several positions trying to avoid them. In addition, after yesterday's accident we suffered some damage to the battery box; We had to change it for today's race and it didn't work well. On the last lap and a half, the bike's performance dropped a lot and I lost positions that I had gained.

It's frustrating to be in this situation, especially when I feel it wasn't my fault, but that's motorcycle racing. We still have two more races and we will try to prepare as best we can for Valencia. We'll try to get the maximum points there and see how we finish the championship."