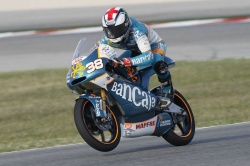 One of the closest qualifying sesisons of the 125cc season took place this afternoon at Misano, where Bancaja Aspar rider Nico Terol and title rival Marc Marquez had dominated free practice but were challenged by Bradley Smith and Pol Espargaró in qualifying. Any one of them could have ended up with pole position in a frenetic finale to the session but in the end it was Bancaja Aspar rider Smith who took his second of the season thanks largely to a sensational first and second sector.

The British rider will be joined on the front row for the third race in succession by his team-mate Terol, who has continued his excellent recent form here and remains a serious contender for the victory tomorrow. The Spaniard topped the time sheets in the early stages of the session and nearly did so at the very end too, missing out by just three tenths of a second on his best lap.

1st Bradley Smith 1.43.329 (19 laps): "I was a little worried because I could see a lot of traffic on track and I wasn't sure if I'd be able to get a clear last lap. Luckily I got a couple of good slipstreams and was able to overtake in the right places, which helped me take pole. It was a tough job and I had to give it everything on the final lap but nothing is easy here - it's a World Championship. The bike is working well here and the chassis is awesome so I hope we can benefit from it agian tomorrow. The four at the front are very close so it will be important not to lose any ground at the start. I want to thank the team because they've done an awesome job, especially in qualifying. Like I say i think it will be between the same four riders tomorrow but I don't want to think about the others - just give my best and see what happens."