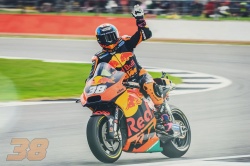 The twelfth round of 2018 MotoGP was cancelled after almost a full day of rain rendered the Silverstone circuit unrideable. The British Grand Prix was victim to the weather from 11am and after a sighting lap a consensus decision was made to wait for an improvement in the climate that failed to materialise.

Bradley Smith achieved his best qualification position on the KTM RC16 with 8th place in mixed conditions on Saturday but the twelfth Grand Prix of the 2018 campaign fell foul of the rain at Silverstone in the heart of England.

Warm-up was completed and the twenty-lap MotoGP race had been moved to the start of the programme to avoid the worst of the forecast but the rainfall was relentless and after a sighting lap where the bikes were clearly aquaplaning the first of a day-long delay process began.

At 16.00 GMT Race Direction cancelled the event and all three MotoGP, Moto2 and Moto3 outings with the British asphalt still submerged in water.

Mike Leitner (Team Manager MotoGP):
“It was a shame for Bradley to be on the third row of the grid and not have the chance to race. In wet conditions he could have done very well. Also Loris (Baz): he did a great job to just jump on the bike without a test and there was a good connection with the team. It’s a shame but we have to accept the weather conditions and rider safety is first. We’ll look to Misano now.”


MotoGP should find warmer and brighter climes in two weeks time with the Grand Prix of San Marino e della Riviera di Rimini at the Misano World Circuit Marco Simoncelli for round thirteen of nineteen.