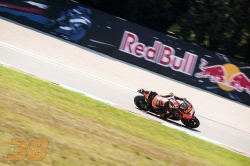 Red Bull KTM MotoGP Factory Racing Team saw Bradley Smith and Pol Espargaro give their maximum at the Misano World Circuit Marco Simoncelli for the second round of MotoGP on Italian soil this season. Smith rode to 16th position and just missed Grand Prix points while Espargaro felt the effects of his collarbone injury and pulled into the pits having completed 16 of the 27 laps. The factory team will now embark on an important two-day test at the same circuit.

The thirteenth round of MotoGP meant one of the trickier tracks for Red Bull KTM Factory Racing Team with the mix of fast and slow corners of the Misano World Circuit Marco Simoncelli accentuating set-up and rider feeling across the flat layout. The crew also trialled a new configuration for the KTM RC16 instigating a busy weekend of analysis.

Bradley Smith started the Grand Prix from 17th place on the grid and after having sliced tenths away from his fastest lap-times through the weekend: he was almost two seconds quicker than the efforts recorded at the same venue by the team in 2017. The Englishman fought on the fringes of the top fifteen and the last MotoGP points until the second half of the sprint when tyre choice came into play. He managed to hold-off Jorge Lorenzo after the Spaniard had crashed and remounted from 2nd position but could only boast 16th place.


Bradley Smith (Factory Rider MotoGP):
“The top five-six were separated by twenty seconds so the leaders really did a good job today with super-strong lap-times. This was always going to a weak track for us but we still improved a lot, especially when you look to last year. We turned up with new package this weekend, which was going to make life a bit more difficult. We tried the very best we could and I pushed so hard to stay with the points group in the first half of the race but towards the end I had nothing left when the tyre started to drop. We'll learn from this weekend and let’s see when we turn up to Aragon. I’m excited for that track because we did two days testing so I think we’ll have more to show.”


Mike Leitner (Team Manager MotoGP):
“We knew when we brought Pol here it would be a difficult mission. Even though it was good to have him back on the bike we found that he couldn't finish the race in the way he wanted without the risk of a crash. It was better to stop and that was 100% clear. It was the correct decision and we are glad he made it: we know he will be in much better condition in Aragon. On Bradley’s side he was working a lot with the settings during the sessions and the race was quite difficult. He just missed the points, but looking at other riders we are easily reminded that this is a demanding track. We now have a two-day test and I think we can work quietly and with short runs for Pol to make an improvement for the next race.”


Espargaro and stand-in test rider Randy De Puniet will now begin a test programme through Monday and Tuesday to assess further modifications and components with a view to the future version of the KTM RC16.