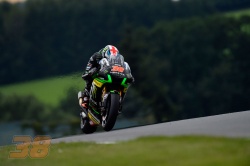 Bradley Smith’s challenging weekend drew to an unfortunate close today with the young British rider falling in the opening laps before mounting a recovery charge but completing the race outside the points.

After opting to switch bikes and therefore begin the 30 lap race around the 3671 metre circuit in Germany from the pit lane, Smith quickly set into a rhythm to remain with the advancing pack and battle for a top five result. Such hopes were cut short on the 3rd lap after lucklessly falling, dropping him back to last place.

The British star showed tireless grit to finish the race with a consistently quick rhythm with his lap time being comparable to the top 4 in the final laps, but was unfortunately too far adrift from the pack to recover as he finished the race in 19th position.

Bradley Smith: – Race: 19th – Championship: 10th – Points: 48
"Today was a big disappointment for me as I was feeling good and knew that I was capable of a strong result here but in the end the crash was all my fault. I made the same call as everyone else to pit and swap bikes, which was the right decision. When the race got underway, I saw Valentino pass Di Meglio at turn one and I knew my race pace was more than good enough to follow Valentino and use him as a reference in these tricky conditions. I got up the inside of Di Meglio and overtook him but as he came back to the apex, I ran onto the inside of the curb, which was still damp, and fell. Of course, it’s a big frustration as the bike, tyres and setting all felt positive. Also, my race pace was equivalent to the 5th or 6th placed times again so a good result was certainly on the cards but unfortunately luck was against me. Now I will rest up over the summer and come back more determined to succeed."

Hervé Poncharal  –  Team Manager:
"It has been another very interesting race today and right at the start, Germany could have possibly had its first victory to celebrate after Bradl started the race on slick tyres. Yet after just a few laps, things returned to normal with Marc taking the lead and the whole field catching up. Pol and Brad both started from the pit lane like most of the riders and Pol especially took things steady due to the unknown conditions for him. We know Bradley had a good rhyme and he was in front of Pol, just right behind Valentino but unfortunately once again he made a small mistake this weekend and paid a high price for it. Luckily, he was able to rejoin the race and finish it. However, it leaves an even worse taste in our mouths to know that the times he was lapping would have enabled him to finish the race around Pol’s position which would have been a really strong result for the team. It has been a tough weekend for Bradley and he deserves much better, I just hope he can get some good rest, recharge his batteries and come back strongly after the summer break in Indy. I also wish a pleasant holiday to the whole team."