Courageous ride of the day went to Smith 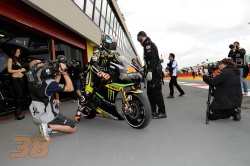 Award for the bravest and most courageous ride of the day went to outstanding rookie Bradley Smith, who demonstrated amazing determination to bounce back from two heavy crashes ahead of the fifth round of the Championship.

Nursing a nasty left hand injury after a heavy fall in Friday's FP2, Smith suffered another bruising crash during this morning's warm-up session.

Way below his peak physical condition, it seems nothing can knock the 22-year-old's confidence and he showed he has desire and determination to match his talent by riding his YZR-M1 machine to a heroic top 10.

Smith, who will undergo skin graft surgery in San Marino to repair damage to his left little finger tomorrow (Monday), finished in ninth position and he will now begin a period of rest and recuperation to be in the best physical condition for the next race in Catalunya.

Bradley Smith 9th - 24 points
"To be honest ninth position was obviously a really good result considering the circumstances of today. This morning's crash was the last thing I needed, so to be able to go the whole race distance with just one mistake was positive for me. I had a lot of problems with my left hand as well as with my wrist and it was magnified with Mugello being such physically demanding track. So I believe I did a really good job. It would have been good to beat (Aleix) Espargaro at the end but considering the whole weekend I should be satisfied with another top 10 result. After a very difficult weekend for my body I just need to rest as much as I can to put me in the best possible condition for Barcelona. We still learned a lot during these tough days, especially from the big crashes, but I suppose that's all part of the game on my way to becoming a better MotoGP rider."

Herve Poncharal - Team Manager
"Today ended a great weekend again for the Monster Yamaha Tech 3 Team. The dry weather helped us a lot after some concerns about rain and to see Cal on the podium again is a great achievement for everybody. His podium in Le Mans was amazing but to see him on the podium in Mugello is very special because he used to have a lot of problems here and he has struggled quite a lot. This shows how much he has improved and his charge in the second part of the race was very exciting and without a small problem at the start when he got tangled with Andrea I am sure he could have been fighting for second. He has proved he is fast in all conditions and definitely Cal is a podium contender every weekend. He is fourth in the World Championship and he recovered some points on Valentino and Marc and we are very happy tonight. Bradley started very strong and we knew this track was going to be special for him because he loves it and it was a pity to see him crashing and hurting his hand. But he showed incredible motivation and he was defying intense pain that most of us can't understand in the race. Two very big crashes made it a difficult weekend but he was very strong and he got faster and faster and he set the eighth fastest time of the race, so big congratulations to him and I am veryproud of my British pair."