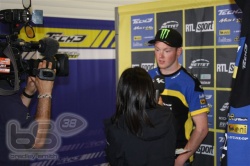 As the self proclaimed biggest fan of Bradley Smith, Wes and I visited the Jerez circuit. Through the rain and shine we managed to catch our hero and had a chat with him and also take several interesting pictures.

Friday first free practice was drizzle, then rain. Brad was right up at the sharp end and finished the session with valuable wet settings.

We waited with great expectations for the afternoon session which started damp but then dried before becoming damp again. Brad passed us on his out lap, then we saw him pass again.......Then nowt!!!!!! The session ended without Brad appearing again. Our hearts were deflated, what was wrong with Bradders?

We called at the pit box after the session finished and caught up with our favorite rider. As always, Brad was upbeat. He told us that the bike had been prepared for a full on wet session and he was sittiing out the dry period. No use going out to just circulate, he wants to go out and set continuous fast race pace laps. Unfortunately the weather held and so Brad stayed 'Box'

Brad is slowly improving the Mistral 610, this has to be done as you are qualifying/practising. No more private test sessions now that the season is underway. only Zavier and Brad ride the Mistral so there is limited scope for collective data.

Brad and Tom were pouring over data to set the bike up for tomorrows Qualfying session, this was very 'full on' No interuptions were allowed. One thinks of the rider relaxing when the riding session finishes, not so in the Tech 3 box, the mechanics were stripping and rebuilding the bikes and all the data technicians were bent over their laptops looking for that little edge that will help Brad.

We left the track full of optimism for Saturday qualifying, and are looking forward to seeing Bradders 'giving it large' tomorrow.