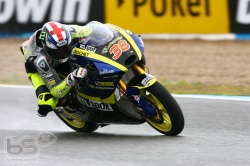 We deceided to have a lie in today and not get to the circuit too early, mainly because of the inclement weather. We missed Brad's warm-up but we're not bothered. Bradley had told me of his weather preference, so it was immaterial!.

I wanted to watch the race from the small grandstand at turn three, but when I tried to gain entrance I was refused. This year a 'special pass' was required and I was not in possesion of one.....'bummer'

I made my way to a good viewing spot on the inside at turn two, this gave me a fair vantage point of the curve but also I could see turn three.

I thought Bradley would be on row five, but there are only three riders per row. This by my maths, now put Bradders on row seven, he was starting P19.

The roar of the engines at the start could be heard and I waited eagerly to see the field flash past. I caught sight of Brad's blue bike and checked out his Union Jack helmet. I knew he had made it around the difficult first bend. I counted the passing bikes. the next lap and calculated that Brad was 16th.

What I witnesed over the coming laps is very difficult to describe, especially if you are at home listening to Toby & Julian on the telly.

Brad was flat out on the tank coming out of turn two and was throwing it into turn three at full revs. You only had to listen to his engine revs to realise that he was 'giving it the berries'. Other riders were using a trailing throttle going into turn three and then opening it up on the way out, some were short shifting before leaning in. What Brad was doing was astonishing! BRAVE is the only word to describe his actions. The hairs on my arms were standing up! Go Brad!!!

I shouted each time I saw him. This heroic action saw him carve through the riders in front. As the laps went by he made up ground on other riders and was lying in tenth position when the race was Red flagged due to the weather.

If only Brad had started from the front!

I made my way to the Tech 3 box and spoke a few words of praise to Bradders, I was extatic with his performance, but I gather he thinks he could have had a better result.