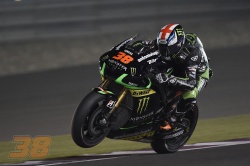 Smith continued his brilliant pre-season by qualifying in his best ever position of 3rd in the MotoGP class for tomorrow’s Grand Prix. His performance also ensured the fact that a Monster Yamaha Tech3 rider has been present on the front row of the grid for three consistent years at Qatar. Having previously topped the 4th free practice session and consistently posting quick lap times all week, Smith worked tirelessly with his Monster Yamaha Tech3 team to finish with a best lap time of 1:54.601 around the 5.83 kilometre circuit. The young English rider’s emphatic performance was less than a hundredth of a second from the fastest rider, and will put in him in the best possible position to battle with the leading riders tomorrow. The Monster Yamaha Tech3 satellite rider finished as the fastest Yamaha rider and ahead of the Factory Yamaha’s of Jorge Lorenzo and Valentino Rossi.

Bradley Smith -  3rd - 1:54.601:
“I am really pleased with today, the bike felt great and I’m really satisfied with the setup. The performance during the fourth free practice session was very promising and fortunately I was able to translate that performance to the new tyre. I was slightly disappointed because with the second tyre, Aleix, Marc and I, all waited a bit too long, as nobody wanted to be followed. My tyres got too cold to push again, so I decided to take the bike back to parc fermé instead of taking any more risks, but I felt I still had some margin.  However, you don’t get points for qualifying, tomorrow is when it really counts and there are 22 laps to battle in. For sure a good start is the key and I know I’m pretty good at them. I also know that I will be strong on the full fuel load as I worked a lot to improve this during the winter. Having said that, there are a lot of strong riders behind me and it won’t be easy, but I’ll give it my all. Tonight I will rest up, and prepare myself and if the bike feels like it did today, I am confident of getting a good result“.