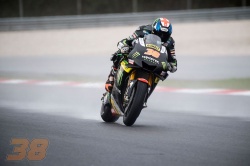 Smith bravely battled through to 14th to conclude the triple back to back GP’s with another determined performance. Smith began the 20-lap sprint from the head of the fifth row of the grid and he expertly navigated his way around the opening lap, whilst impressively climbing four positions, before concluding it in 11th. From here, the British star stuck into a solid rhythm, yet despite giving his all, he was shuffled back to 16th after one-third of the race distance. However, the determined 25-year-old remained focused and pushed through the challenging conditions all the way to the chequered flag, which he met in 14th. This result marks a third successive point scoring finish since his comeback at the Japanese GP, from his knee injury, with Smith’s displays highly exceeding expectations in the flyaway races despite not riding at full fitness. Now, the British star aims to conclude his six-year partnership with Tech3 on a high note in his final appearance at the next round in Valencia.

Bradley Smith: – Position: 14th – Championship: 18th – Points: 55
"I have to start by saying that the three back to back races have been fantastic and I am more than satisfied with the results. To come back from my injury and score three point scoring finishes is much better than what I was expecting. If we look at the bigger picture, the Monster Yamaha Tech3 team did a superb job as well as the Clinica Mobile medical staff who made sure that I could compete in every session. In terms of the race, it certainly was tough due to the conditions but we have to be content with another finish in the points, even if we were hoping for more. I decided to risk using the hard rear tyre but it is not a compound that I have liked in the past, even though my feeling with it in FP4 was ok on the whole. Unfortunately, with the amount of water that was on the track today, I wasn’t able to generate the right temperature into the rear tyre so it was tricky but I did my best and I don’t think that I could have given any more. It’s a pity to end up in 14th because we’ve had really good pace throughout the weekend, yet we have to look at the positives and take them onboard. Now, we will have a weekend off and then I will head to Valencia, ready for my final appearance with the Tech3 team, where I will do my absolute best."

Hervé Poncharal - Team Manager:
“The flyaway races have been really tough, especially in Australia and here at Sepang, where the weather was inconsistent and to be honest, quite crazy so it didn’t make anyone’s life any easier. Anyway, I think that we have come out of these three events with some vital points. The conditions made it simple to make a mistake and we saw some of the top guys crash in front of us. Bradley did a great job and I must say thanks to him. To ride in the physical state that he is in is difficult, but when it’s also raining and very slippery, like it was today, it’s easy to potentially injure yourself further so I think he had a cautious approach. Eventually, Brad scored some points which is important and we have almost secured 5th in the team standings which will confirm Monster Yamaha Tech3 as the top independent team. Both Brad and Pol have delivered strong performances in the past three Grand Prix’s and now we will have a rest before Valencia and then we can enjoy the last outing with the guys which will be significant and very emotional for many reasons. So, I also want to say that the championship keeps getting more and more exciting because now we have nine different GP winners. Everybody at Tech3 is particularly pleased to see Andrea Dovizioso win today because he is our former rider and we have some great memories with him.”