Disappointment for Bradley in Brno 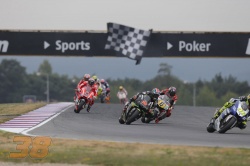 Smith’s Czech Republic MotoGP race didn’t live up to expectations after he fell out of top six contention in cool and cloudy conditions at the Brno track this afternoon.

Bradley was optimistic that he could battle for a top six result after he impressed with an outstanding qualifying performance yesterday. The rookie equalled his best grid position in sixth and he was running a strong pace right behind nine-times World Champion Valentino Rossi in front of a massive crowd of just over 142,000 fans.

Feeling comfortable and confident after improving his pace on a full fuel tank in practice, Smith’s challenge was ended prematurely when he crashed at Turn 9 while occupying seventh.

Today’s race might not have had the outcome Crutchlow and Smith had hoped for, but both have once again demonstrated their high potential in Brno and the British pair are now eagerly anticipating a return to form in front of their home fans at Silverstone next Sunday.

Bradley Smith DNF – 59 points:
“The race ended far too soon and it is not the way we wanted a positive weekend to end. I don’t feel I did anything different in that corner and I felt comfortable and the bike felt very good. The improvements we made on a full fuel tank made the bike much better in the early part of the race but I got caught out in Turn 9. The data showed I accelerated a fraction earlier and those small margins can make all the difference. Unfortunately the handlebar was broken so I couldn’t get back in the race. But in my rookie season this can happen when you are pushing to try and learn and build experience. At least I don’t have to wait long for Silverstone. I’m disappointed with today but highly motivated to build on the positive points we gained here. Racing at home is always special but this will be my first MotoGP race at Silverstone and I can’t wait.”

Herve Poncharal – Team Manager:
“We are disappointed because Bradley started the race with high expectations after he had performed so well all weekend. I knew he was going to push very hard and that’s what he did. Bradley was really strong and unfortunately he paid a big price for a small mistake. It would have been good to see him try and learn from that experienced group in front of him but he has shown his pace again this weekend and I am very happy with his progress. The good news from today was that he was not injured, so we can head to Silverstone with confidence high that he can produce a strong showing in front of the British fans. I know he is really pumped up for Silverstone and I have no doubt we will experience a better outcome than today.”