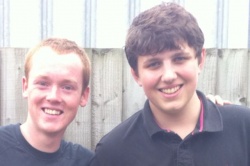 This year you’ve faced some pretty tough competition, especially from the likes of Marc Marquez, Pol Espagaro and Nicolas Terol. Did you always consider these riders, especially Marquez, to be a big threat to your chances of winning this season?

I suppose I was always looking at Marquez as “one to watch”, but only because he had moved from KTM to Aprillia. I was always interested to see how he’d cope with the transition to a brand new bike and team, but obviously that went incredibly smoothly for him. Honestly, I’m not all that surprised when looking at the top three in the standings right now - at the beginning of the season I just wasn’t competitive enough because of some issues with the bike, but now I’m really feeling much more in control for the second half of the season. All I want to do is perform as well as I know I can and make sure we’ve got the Smith name in front of the Spaniards!

Both you and Terol had some problems with the bike earlier on in the season. Judging by the fantastic qualifying session you had at Brno, is it safe to say these problems have been ironed out?

Last season, I suspect I probably looked better than I really was on the Aprillia because the Derbi’s were having such a hard time. So this season was a real wake up call for me, as things can not always go the way you want them to. The earlier problems we had have gone now, but we’re still trying to squeeze some extra speed out of the bike. In 125, the bike has to be 100% perfect to be competitive, so if you’re riding a 95% perfect bike, the gap between you and the other riders is just too big. We are pretty much there with the bike now and the everything is shaping up really well. The fact that I was near the lap record in Brno means that the bike is slowly returning to form, and it’s making me much more confident about the remaining races.

I expect to win, and I expect the best from myself. Everything has to be perfect to pull off a victory. I always try to give 100% in every single race, but I always have to be critical of myself to keep moving forward. Brno was a funny one though - I just wasn’t mentally there that day. The conditions and the feeling of the bike weren’t playing to my strengths. However you can only blame these things so much and I think my focus before and during the race wasn’t up to scratch. If you lose focus, you can end up losing a few seconds here and there which adds up to a disappointing result.

When we last spoke back in February, you told me that you were definitely going to be in Moto2 in 2011. Is this still the plan?

Yep, that still is the plan; obviously not as many doors are open right now because I’m not leading the 125 world championship, but there’s some really exciting possibilities for next year. At the moment, things are around about 50% done with finding teams and doing deals etc. So things still need to be sorted out, and you’ve got to remember that Team Aspar haven’t decided what they’re going to do with me next year. But things are definitely moving forward and progressing nicely, and that to me is the most important thing.

What about after Moto2? Will it be straight to Moto GP, or would you ever consider a move to World Superbikes?

You know, I actually prefer the format of World Supers more. Two races in one day is such a great idea and I think I’d prefer it - the more time out on track the better! But, yeah I’d never rule anything out. Who's to say that I wouldn’t go back to 125’s? It’s a possibility. Racing is racing at the end of the day, no matter what you ride. But I have to admit that it’s my dream to be competitive and ride in MotoGP, but if my career took a different route, I wouldn’t complain.

Personal fitness is very important to you, and you regularly tell us on Twitter about how many triathlons you do when you’re not racing. Do you think you’re much fitter than you were last season? If so, was this your plan?

Right now I’m finding that doing all these triathlons is a pretty good way to get my frustration out. They help me keep my desire to win going - if I’m doing well and winning triathlons, it makes me even more hungry to win on track. And, you know, all the problems with the bike and some not so good results were really getting me down, and the frustration was starting to take its toll on me. The grind of the triathlons helps me focus on something else for a while and then come back ready to ride on track. Next year I’ll hopefully be on a Moto2 bike which will be heavier, bigger and more powerful, so my fitness is going to have to improve so I can still be competitive. If I build it up steadily this year it should stand me in good stead for the winter. Building up fitness has been pretty useful during some of the sweltering races this year too - hopefully I can perform just as well in 30 degree heat as I can in pretty cool conditions.

Another British rider who has been in the spotlight in the last few weeks is Cal Crutchlow , who seems to be closing in on a deal to ride for Tech 3 Yamaha in MotoGP. Do you think this is a good move for him?

Absolutely! Cal is a great guy with a great riding style, and he’s obviously very talented. If you look at his career, you’ll see that he’s slowly got better as he moves up to bigger bikes so that can only be a good thing. But we have to be realistic - MotoGP is the best of the best, it’s world class. I’ve got no doubt that Cal is a world class rider, but I think we have to take into account that it would be very difficult for him to finish in the top three in his first year. I reckon a top ten finish would be a fantastic achievement. Then he can start building up better results - 8th, 6th, 4th etc. Who knows what will happen after that? I’m in no way saying that he shouldn’t have the desire to win, but there’s new tracks, bikes and riders he’s going to have to compete with. It won’t be easy, but I know myself and all the British fans will be behind him 100%. Hopefully in 2012 with the new MotoGP engine we might attract some SBK riders across and get some more British riders on the grid, which can only be a good thing for British sport and MotoGP as a whole. Again, we shouldn’t expect a rookie Brit to suddenly start finishing twenty seconds ahead of Rossi and Lorenzo every week. We’ve got to get as many Brits on the grid as possible, and then build it up steadily from there.

Valentino Rossi revealed that he will be riding for Ducati next year. Coming from the viewpoint of yourself as a rider, how do you view this huge leap to a bike which has had limited success?

He’s not mad, but I think Valentino has taken a pretty big risk with this one. It’s a calculated  high-risk decision. It’s definitely not something that many riders have ever decided to do. He’s on the best bike right now, and he’s put a lot of effort into developing that bike into World Championship winning material. It’s not gonna be easy for him in the first season, but let’s remember who he is - he’s Valentino Rossi, he’s the best. I doubt that anyone at Ducati is going to neglect him or deny him opportunities to develop the bike further! Right now Lorenzo is in a league of his own with regards to his riding ability and the performance of the bike, so I think that Rossi is going to be hungry to knock him off the top spot on a bright red Ducati and make sure it stays that way for the next few years! I very much doubt that Rossi will struggle to get results on the Ducati. I think, if anything, he has the potential to do better than he ever has done before.

Finally, you’ve got seven very important races left. Are you feeling 100% confident now that you can push as hard as you can?

Absolutely! Let’s not get carried away, the problems were annoying, but they were pretty small in the grand scale of things. When I was first on the grid in Brno, I felt like things were back to how they should be, if you get me - I was leading the way, I was better than the rest. But I couldn’t carry that feeling through to the race. It’s up to me to replicate that feeling of being in first and carry it across to all the other races. I’ve still got Misano to go, which is a track I really like and one that I’ve held the lap record for the past two years. It’s time to get to work basically, and make sure that I get some really solid results. I’m fourth in the standings now, and let me tell you - I’m not going to be finishing fourth at the end of the season!

Thanks very much for taking the time out to do the interview. All the best for the rest of the season!

No problem, thank you!