Early end for Smith despite potential at British GP 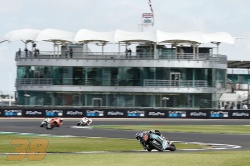 Bradley Smith had a disappointing end to his home race weekend at the British Grand Prix with PETRONAS Sprinta Racing crashing out of 25th place in today’s race at Silverstone. Despite the fall, the substitute rider was pleased with the progress he enjoyed throughout the weekend

Jumping onto the bike for the first time only earlier this week as a one-off replacement for the injured Khairul Idham Pawi, Smith was unhappy to be denied the chance to show his potential in the race. However, bringing considerable experience to the team thanks in part to his time as a MotoGP rider, he leaves positive that he’s helped them make a step forwards with the development of their Kalex machine.

The team’s next outing in Moto2 gets underway at the Misano World Circuit Marco Simoncelli on September 13th, with race day at the San Marino Grand Prix on Sunday September 15th.

Johan Stigifelt (Team Director):
“It was a new experience with Bradley at Silverstone, but with another new rider in Moto2 it was never going to be an easy weekend. It’s not straightforward to jump onto a bike like this, especially at your home race, but the steps we made were in the right direction and he closed the gap to the front in every session. In the race he was coming through the field strongly and set some very fast lap times, and it’s just a shame he had a crash - but things like this can happen. With his knowledge in the team, we learned a lot from him about the bike. I want to say thanks to him.”

Bradley Smith:
“I found my rhythm in the race, had just done my best time of the weekend, and was feeling better and better - but maybe I forgot what bike I was riding and flicked it into the last corner a little bit too aggressively and lost the front. That’s the negative of riding lots of different bikes in a short space of time. I’m sorry for the team because we didn’t want things to end this way. Apart from the crash, I’m very pleased with the progress we made over the weekend and I really enjoyed the opportunity.”