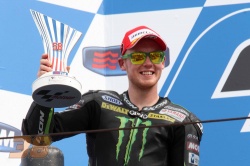 Monster Yamaha Tech3 Team rider Bradley Smith delivered an exceptional performance in front of 92,315 people to clinch the second MotoGP rostrum of his career after conquering the Misano race in 2nd. The young Briton started from the second row after a successful qualifying campaign yesterday. However, moments before the beginning of the 28 lap sprint rain began to fall at the Misano World Circuit Marco Simoncelli and shortly after the lights went out, the weather deteriorated which prompted riders to change bikes in the first quarter of the GP. Yet, after finishing the opening lap in 6th place, Smith took the brave decision to remain out on the track with slick tyres in the wet whilst every other rider pitted.

As the race progressed he dropped back to 21st on the 11th lap, but his choice to remain out on the track paid dividends when the rain stopped falling and the circuit began to dry quickly. Here, the young British rider rocketed through the field and back into 9th position with ten laps remaining as the rest of the riders changed back to their dry bikes. Smith continued to improve his speed consistently and furthered his ascent before expertly moving into a podium position on lap 20. Shortly afterwards, he moved up one position and eventually sped across the finish line in this placement after having made the climb from 21st to 2nd. The result closes a hugely successful weekend for Smith who now moves back up to 5th in the world championship standings after the expertly calculated ride.

Bradley Smith: – Position: 2nd – Championship: 5th – Points: 135
“I am thrilled with this finish as I feel that I earned it today even though it was a big gamble! It was very difficult to make the right decisions in the race and I tried to make a few calculations in my head. I looked at the sky before it started and I said to myself that if it rains, it will only be for a short while and I hoped it would dry quickly. However, I still didn't know how the new surface would be in the wet. My decision to stay out was initially because I missed the lap when Jorge and Vale pitted so I carried on and I believed that the rain had slowed down slightly. At this point, I already had lost a lot of time, therefore I thought it would be best to wait a few laps and see what happens and when it stopped I knew the gamble could work as I realised that they might have to pit twice. Furthermore, I kept saying to myself that luck favours the brave which motivated me even further and here I am! My race position kept going up and to finally come home in 2nd is very special. This result is one of my greatest and it's a truly emotional moment. In Phillip Island I just finished the race and got the podium but here I had to ride really smoothly and with skill as well as talent in these conditions. We have to take opportunities like these because as a satellite team we work really hard for 5th or 6th every race, but the rostrum is just out of reach. So, I'm even more delighted to give this finish to the team and the sponsors and I can't wait to get back out on track at the next round.”

Hervé Poncharal - Team Manager:
"What a fantastic way to end a great weekend with this super result for Brad and the team. Like everyone on the grid I was praying for a dry race after the difficult time we had in Silverstone. The man up there didn't listen to me, which I thought was bad at the time! Brad had a good start but we were a bit nervous as the rain kept falling. Everyone pitted except Bradley and at one stage I thought he was brave but the weather got worse and then he was losing more than 10 seconds a lap. Yet, fortunately the rain stopped at the right moment and from there, he showed incredible determination and understood that today he had to take the risk. Anyway, it was a good race with not many crashes, so firstly, I must say thanks to Brad who was very courageous and I must also give him a massive congratulations as he more than deserved that podium. After this and last year's result, hopefully there is one more step for him to climb. Yet, the weekend has been bittersweet as Pol had a tricky time. He had a great start and pitted at the right time just like everyone else, plus he was up to 6th for the majority of the race. He then came into the pits but once he jumped on the dry bike, he started to encounter some technical issues which prevented him from finishing the race. I feel very sorry for him as he was clearly competitive all weekend long. Even though he didn't complete the race, he was fast and must not blame himself. If Brad can fight for podiums then Pol can too, so he needs to keep the motivation and the positive spirit high and let's go to Aragon full of energy."