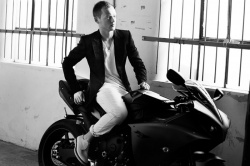 Could Bradley Smith be the guy to break the 35-year drought of British MotoGP champions? He’s certainly up to the challenge. SPASHION talks to Smith about the allure of speed.

Stating ignorance possibly breaks a fairly fundamental rule of journalism, but when I meet with Bradley Smith, the young speedster from Oxford who’s been contracted by French racing team Tech3 as their blossoming hope for MotoGP motorbike racing, I admit, I don’t know very much about motorcycles, much less racing them.

Sure, of course, I’ve read up. Going into the interview I know that Smith came second in the 2009 125cc Championships, which makes his performance the best by a British rider since 1973. I also know that last year was the 21-year old’s debut into the Moto2 World Championships (“The middle class,” says Smith), where he came an impressive seventh. I know that Tech3 Racing Team has signed him up and that Smith has one more year in Moto2 (“for another year’s experience,” says Smith) before climbing into the MotoGP big league in 2013.

I have it down in my notes that this well-spoken guy form Oxford is no stranger to the podium (six times in 2010, nine in 2009) and that his place in last year’s Moto2 makes him the highest placed Brit ever in the category. I’m also aware that because of all this, Smith, the tall, lean guy who first jumped on a motorbike at age six, has been tipped as one to watch; the Brit who could possibly go all the way to the top of MotoGP racing and break the drought of Champion British MotoGP riders since 1977 when Barry Sheen won the Championship title for his second and final time.

I know all this, but I don’t really get it. What is it about motorcycles that men love so much? What is it about going fast on two wheels that makes Sean Gleason, our bike-nut photographer on set, want to talk bikes and speed and fear with Smith throughout the shoot? And, ok, while we’re at it, what is it about speed-demons that women find so tantalisingly attractive? (Come on, motorsports stars get good-looking women, we all know that.) Well, as I sit down with the strawberry-haired Smith, I’m about to get educated because Bradley, in his intelligent way, is more than capable of filling me in on what makes motorbikes and speed, and the motor racing industry as a whole, so alluring.

First we get down to speed.

“Basically you ride on the limit of what you’re able to do,” says Smith. “If I stay in my comfort zone it’s boring. Anything I do now is out of my comfort zone; I’m trying to go further and beyond. You want to go faster so you take bigger risks… I just don’t enjoy riding slow. The only way that I enjoy things now is if I scare myself.”

If Bradley Smith wanted to change careers sometime into the future, he’d do very well as a motivational speaker. The guy can sure spin a line (he says things like “My low-point actually turned out to be a high point”) but Smith’s enthusiasm for motorbikes and “going faster” is so palpable I can help but get into it. I feel myself nodding. Agreeing. Yeah, scaring ourselves stupid sounds good…

“I think it’s about striving to be good at everything that you need to be good at,” Smith continues. “It’s about having a fearlessness to take all the risks and beyond to do that ultimate lap time or to get the ultimate result. If you ride in your comfort zone, you don’t get to a world championship. You’ve got to be willing to put everything on the line.”

And that’s what makes Bradley different from most other guys (yes, and me). He’s more than willing to give everything he has – and presumably that means his life as well; lets not be shy in saying it, motor sport is a dangerous business – to be one of the first three across the finish line.

“For every race, from the start to the finish line, you have to put in 105%,” Smith says. “Sometimes that means you’ll crash because you’re going beyond your limit but unless you go above your limit you’re not going to be fast enough.”

This makes me think back to a conversation that Smith was having with our aforementioned photographer earlier on set about how Bradley’s mother won’t let him have a road bike. (“Because your slow is everybody else’s super fast,” says Bradley, repeating his mother’s words.) So I ask him what she thinks of him racing around a racetrack at 160miles an hour.

“I’m lucky, my mum has grown up in a racing world,” Smith says. “She sees I have so much passion for racing that she could never take it away, even though I’m sure she wanted to at times.”

The baby-faced Bradley was born with racing in his blood. His father, now his number one fan and supporter, is a keen motocross rider who owns and runs a motocross track in Oxfordshire.

“I grew up from the age of three on the motocross track. I’d go out with my dad on the digger and working on the track,” says Bradley. “Every Wednesday and weekend there was a race going on. The rack was only 50 metres from my house so I really grew up around bikes. It was always something that I really wanted to do.”

Having witnessed firsthand the persuasive talk of Bradley Smith, it’s not hard to see how a much younger Bradley managed to convince his parents to buy him a motorbike at age six.

“I was told that until I was six I wasn’t allowed [to ride a motorbike] so as soon as it was nearly my birthday I slipped it into conversation, “I’m nearly six, can I have a motorbike?” says Bradley with his get-anything smile. “Suddenly there was shear panic on my dad’s face. But by Christmas I had one.”

Which gets us to racing. For thrills, I ask Smith what it feels like to be out on the track and, possibly for my benefit, his explanation is back to the basics. “It feels like the nerves you have when you go for your driving test. It’s the same kind of pressure,” he says. “Basically when you’re on that start line it feels like being on the driveway about to drive away for your first driving lesson.”

Once the chequered flag waves them off, the race itself “is a high speed game of chess,” says Smith. “You’ll go in bar-to-bar, sometimes even arm-to-arm with people – but at 100 plus miles an hour. It’s like driving down the motorway and starting to turn into people. That’s basically what we’re doing out there. It’s like bumper cars but with bikes.” Lordy…

Speed might come first for Smith but the technology and craftsmanship of the machines he rides come a close second.

“Just riding isn’t enough,” he says. “The engineering is something I’ve always been fascinated by – a bike is not just metal and an engine. It’s a living thing.”