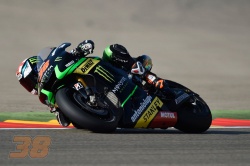 Bradley Smith will start from the fourth row in 11th after unfortunately falling whilst campaigning for a strong qualifying position. The British rider began his day well by setting the 6th quickest time in FP3 with a 1’48.615 which was less than three tenths from his team mate in 3rd and already 0.239 faster than his qualifying time from last year.

This convincing performance enabled him to pass straight into Q2 and highlighted his rate of improvement plus his ambition for the qualifying. As the session began, the British star ran his first few laps to gather momentum, before pitting and changing to the second tyre. However, whilst beginning his charge Smith lucklessly fell, yet his earlier lap of 1’48.810 confirmed 11th. However, he remains fully determined for the race where he intends to undertake a flying start and score a positive result at the MotorLand Aragon circuit aboard the Yamaha YZR-M1.

Bradley Smith: – Position: 11th – Time: 1'48.810 – Laps: 5
"After a truly positive and productive day it is of course disappointing to finish the qualifying in this manner. At the end of my out lap in preparation for my second run, I was looking for someone to follow like Valentino, Pol and Bradl who were all behind me and I thought getting a tow would have helped me to squeeze an extra tenth or so. Unluckily I did not consider that there were a lot of right handed corners at that point of the circuit and after changing to a left corner, the tyre was slightly cold and I had a big highside. However the day was still positive regardless of the end result as we worked on the setting and electronics in order to preserve the tyre as tomorrow it will be a tricky race and tyre life seems to be the main issue here. It’s a disadvantage to start that far back but I believe in terms of the lap times, it will be close and there’s a long way to the finish flag. I know how vital a good start is, especially with the short run to the first corner and even though I will have to pick my way through the field, I am still confident for the fight."