Frustrating end to the weekend for Smith 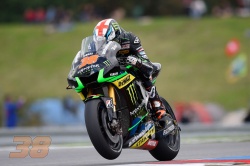 Bradley Smith completed the 11th round of the 2014 World Championship with a hard fought race to 9th position in the Czech republic after giving his all despite being hindered by traction issues. The British rider began the 22 lap sprint around the 5403 metre Automotodrom Brno from 4th on the grid after an impressive display yesterday in qualifying which saw him only 0.004 from the front row.

As the race began with 138,000 ecstatic fans trackside to view the spectacle, the British star slipped back to 9th at the end of the first lap but remained determined, quickly setting his fastest lap of the race on the lap 5. As the race progressed, he endured a lack of rear traction but persevered to attempt to claw back the deficit to the position in front. He closed in on 8th place right down to the finish line but met the end of the race in 9th with his resolute performance gifting him further valuable World Championship points to add to his 2014 campaign.

Bradley Smith: Race: 9th – Championship: 10th – Points: 65
"It goes without saying that the result today was much lower than I had anticipated after such a strong qualifying and I was sure that I could ride much closer to the leading bikes. It is a mystery as to why but I had less rear grip compared to this morning and yesterday afternoon. My traction control system needed to work considerably more during the race and I lost a lot of time exiting the corners, plus even when I was coming down the straight the rear was spinning. This is a frustrating end to the weekend as I know I have a much better pace than what I showed today. I feel we should be in the top six and challenging the factory boys but these things happen sometimes, so now we need to find out why and then get ready as I head to my home Grand Prix where I am convinced I can have a great race in front of my home fans."

Hervé Poncharal - Team Manager:
"It wasn’t the end we were hoping for as after the qualifying we were really confident of another potential top five result for either of our two guys as well as another race like Indianapolis where we finished right behind the top four. Bradley struggled a bit, he did the best that he could have done to finish 9th. Of course, this is not what we had hoped for but this is racing. Unluckily, today’s result means that we have lost a bit of ground on Ducati in the team championship, but for sure we will use this as extra motivation at the next GP. We are fortunate to have a test day tomorrow to work on today’s issues and to prepare ourselves in the best possible way for the remaining seven races of the 2014 MotoGP World Championship. The first of these rounds will be Bradley’s home GP in Silverstone in a couple of weeks time, where for sure the determination and ambition for both of our riders will be high."