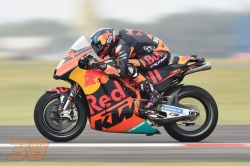 Two days of practice and qualification with a variable climate and degrees of grip of the flat and twisty Termas de Rio Hondo racetrack also marked an astounding Gran Premio de la Republica Argentina today. Despite the upheaval of a race that was initially declared ‘Wet’ but then delayed with almost the entire grid opting for a dry tyre set-up as the Argentine tarmac dried.

Smith set off from the seventh row of the grid and was poised in the higher echelon of the leaderboard. The Brit was as high as ninth but then faded back to seventeenth after some contact with other riders (on what was a tricky layout for overtaking) and he crashed at Turn 1 seven circulations from the flag.


Bradley Smith (Factory Rider MotoGP):
“It was a shame. It was an exciting start to the race and I think I made up twelve positions in the first laps. I was fully committed in the patchy conditions. Unfortunately I had a few situations where riders hit me and I lost a lot of ground. I tried to get my head down and start to come forwards, and my lap-times were coming down but I got too greedy in the first corner and went off-line. I lost the front. It was a frustrating way to end the race but there are a lot of positives from this weekend. I found a good feeling with the bike from FP1 and the performance was there in the race so I need to keep doing the same things and fingers crossed in Austin things will turn out well.”


Mike Leitner (Team Manager MotoGP):
“We see how difficult it was for us to miss Pol in pre-season testing. We had to come out of the ‘hole’ we found ourselves in, especially after Losail, and we did it. A big thanks to every single person who never gave up around us, and this result shows that the race is on Sunday and it is the last laps that really count. You can have some dark moments and ups-and-downs in the sessions through a weekend but you have to keep the belief because the points can come.”


Staying within the same region of the world, MotoGP ventures north and to the epic setting of ‘COTA’ in Texas for round three and the Red Bull Grand Prix of the Americas in two weeks time.