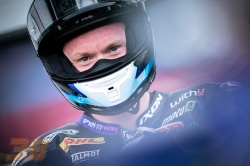 Following a decent Friday for the WithU GRT RNF MotoE Team, today’s first race on home soil was overall a good one for the riders. Misano World Circuit Marco Simoncelli hosted the penultimate race of the FIM Enel MotoE World Cup 2022 campaign; although the squad was ready for any condition, the guys were happy to find sunny weather despite completely opposite weather forecast.

In the eight-laps race, Niccolò Canepa, who started from seventh on the grid, unfortunately lost positions in the hectic opening lap, but quickly made up for it. In the always super-competitive field, the home hero started to fight to recover as much places as he could. The rider #7 made his way into the group and kept progressing lap by lap, eventually crossing the line in sixth just one tenth away from top 5, showing a strong race pace which was matching the one of the guys fighting for the podium places.

Meanwhile Bradley Smith, who was declared fit on Thursday after the crash suffered in Austria’s Race 1, had a cautious getaway due to what happened just two weeks ago. The Englishman made great progress from Friday and improved his lap times impressively, being able to gain positions. The #38 rider fought until the very end and crossed the line in 12th to add points on his FIM Enel MotoE World Cup tally.

The grand finale is set to start at 15:30 local time on Sunday, with the whole WithU GRT RNF MotoE Team crew eager to shine and have a proper championship ending.