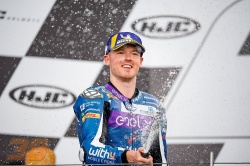 Bradley Smith finishes on the podium at Sachsenring in the first round of the MotoE World Cup, leading the race for several laps.

ONE Energy Racing and Bradley Smith became part of history in the MotoE World Cup by finishing on the class' first ever podium. The British rider claimed a great second position after starting from the third row of the grid, as well as managing to lead a race that ended prematurely due to a red flag.

Smith made a great start from seventh place, was second into the first corner and quickly got to the front of the race - reduced to seven laps due to a delay in getting underway. The ONE Energy Racing rider continued in the fight for victory, leading on several occasions. With two laps remaining, a crash for another rider resulted in a red flag, ending the race ahead of time and giving Smith second place.

After this result, Smith is second in the overall standings with 20 points, 5 off the top spot. The next round of the MotoE World Cup will be the Austrian GP on August 9th to 11th.


Matteo Ballarin - Team Principal
"We are very happy. Bradley [Smith] had a great race, with a fantastic start. Yesterday's E-Pole did not turn out as we had hoped, but Bradley is a very special rider and today he provided a great performance. The whole team worked very well during this first weekend. We can continue to improve ahead of the next race, but we had a great first weekend here in Germany. Finishing on the podium at the first round is a very positive result. The MotoE World Cup is a new adventure, and there are many things still to be discovered. It is all really exciting.


Bradley Smith:
"I'm very happy to have got on the podium at this first MotoE World Cup race with ONE Energy Racing. Yesterday I was somewhat disappointed with my result in E-Pole, but I still knew that if I got a good start I could be in the fight in the race.

I managed to get a very good start and lead the race, so that was nice. I couldn't be a part of the race simulation in Valencia, so I was lacking some knowledge of what the contest was going to be like, but I learned a lot today. It was only five laps, but I know where I can improve for the next round in Austria.

The race was exciting, so that's good for the show and for the competition. I want to thank the team; they changed the bike from yesterday to today and did a great job."