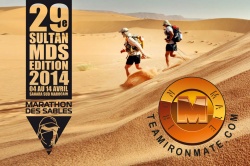 Mark Kleanthous, a good friend of Bradley's will be competing in the marathon des Sables, a 155 mile self sufficient 6 day running event in April.

It is the equivalent of 6 marathons in 6 days competing in one of the most inhospitable places on the planet, the Sahara dessert in southern Morocco.

The Marathon Des Sables (Known as MdS) has a 2 years waiting list and involves navigation through the desert from 18 miles to the longest stage 51 miles almost a double marathon. Each competitor has to carry everything they need for the 6 days.

The organisers provide water and a bivouac (tent) that you have to share with 7 other competitors. Temperatures can exceed 40 degrees during the day and plummet to zero with the wind chill factor by night)

Each competitor has to carry a minimum of 12,000 calories sleeping bag toiletries plus compulsory emergency items that include venom pump flare compass plus other items that all add to the challenge making this the toughest foot race on the planet.

Each year the course is different to avoid competitors checking out the route and hiding food and fluids under rocks or in the sand on route to save carrying it.

Considerable preparation time is spent getting the lightest of everything from a signalling mirror to the mostly dense calorific dehydrated foods to save carrying unnecessary weight. Mark is one of a few that has been able to get his back pack down to the minimum weight of 6.5 kg (14.3 lbs) most back packs weigh in excess of 8 kg (17.6 lbs). Mark has competed in more than 1,050 events world wide and has run 75 marathons and finished top 10 in many multi- stage events. Mark believes that this will be one of his toughest challenges ever.

You can follow mark on Twitter @ironmatemark or via his web site www.IRONMATE.co.uk
Check out the official race web site to track each athlete live, check results or for live webcam footage at www.darbaroud.com/ or Twitter @marathonDsables


Fast Facts about the Marathon des Sables
In numerical order

1 satellite image stations
2 year waiting list to run in the MdS
3 kmph is the average minimum speed of the last person to officially finish
4 quads to ensure the environment and safety of the race
5 cameras
6 times winner of the MdS is Mohamed Ahansal brother to Lahcen who has won 10 times
8 "MdS" special commercial planes
8.5 tonne GTR Maroc incinerator that has to deal with 1,500 people (competitors & staff)
10 times winner of the MdS is Lahcen Ahansal brother to Mohamed who has won 6 times
10% walk the entire way inside the cut off times

14 Kmph is the average maximum speed of the winner
14% of competitors are females
16 years old - Youngest competitor
20 years Mark has wanted to compete in the MdS
25 buses
29th year of the marathon des Sables in 2014
30% have competed before30 computers &  fax machines
30% are in a team of 3 or more
31% are French competitors
45% are veteran competitors
49 are British females competing in 2014
52 medical staff including foot care known as "Dr Trotters"
70% are international competitors
79 years old - Oldest competitor
90% alternate running with walking
155 mile has to be covered in 6 days (equitant of 6 marathons)
325 are British male competitors in 2014
12,000 competitors have entered the event since the first event in 1986
130 volunteers are on the course
450 volunteers are involved each year
300 berber and Saharan tents
120 all terrain vehicles
150 litres of disinfectant
374 from Great Britain
1,027 was a new start line record of competitors in 2013
1,064 competitors who will start in 2014
2,700 competed
6,000 pain killers
6,500m of elastoplasts
15,000 calories are needed just to cover the distance by each competitor
19,000 compresses
120,000 litres of mineral water are used during the MdS & far too many blood blisters to count!