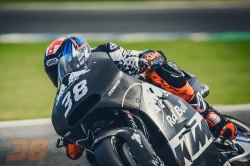 Following the wildcard entry at the final round of MotoGP and the IRTA tests in Valencia that immediately followed, the KTM Factory Racing Team wrapped up three extremely intense and exciting weeks in Spain on Friday. After Valencia, testing continued in Jerez where the team’s regular test rider, Mika Kallio of Finland and British factory rider Bradley Smith worked for three days on the development of the KTM RC16.

Attractive conditions prevailed on the first two of the three days, with an air temperature of around 15 degrees Celsius and 25 degrees of track temperature. Although the riders didn’t take to the circuit until around noon each day, Kallio was still able to put in a total of 171 laps on the KTM MotoGP bike over the three days. Smith managed a total of 86 laps, despite a knee injury that is not yet completely healed, and two harmless crashes. He took a break however when it rained on the final day.

Mike Leitner (Team Manager MotoGP):
“Looking back, I'm very satisfied with the work that the entire team has done over the past year, especially when you consider that many other things kept us busy in addition to the development work. The last weeks have shown us that we have created a racing team, with which we will have no hesitation in joining MotoGP next season. Our time difference to the fastest bikes is between one and two seconds. If we can reduce this step-by-step, then it will only be a matter of time before we move up the rankings. The input of both our MotoGP riders was now also very important for our test rider, and as soon as he adjusted to it, this helped us with our test work.”

Sebastian Risse (Technical Director Road Racing ):
“We were fortunate enough to be able to try a lot of things on the first two days. When it rained on Friday, we used the time to talk to new members of the team about what has to happen in the next two weeks before work on the construction of the bikes has to begin. The most radical step we made in this test was certainly with the electronics because we had additional input here from new personnel. Regarding the ergonomics, it has apparently paid off that we invested a lot of energy at the beginning of the project because both MotoGP riders are very happy with the situation. The first test in Sepang is going to be important for us before the season begins and we'll be there with both our test team and our racing team.”

Bradley Smith (Factory Rider MotoGP):
“Because of my injury it wasn’t the easiest starts to the project, but nevertheless I still think my first four days on the KTM RC16 were very productive, especially because input from Mika and Pol could also accelerate things a bit. Naturally, we want to advance as quickly as possible, but we stay realistic, and we now have very clear statements from three riders on which areas next need to be improved. Both the team and I have a lot of work ahead of us in the two months before the Sepang tests, and I want to be in better physical shape the next time I get on the bike. We are only at the beginning of the work we have to do, but the level is already better than expected.”

There is a general ban on testing for factory riders in December and January, but in the coming month, the team will again work intensively on the construction of the motorcycle and other infrastructure, especially in the two weeks before Christmas. This will be to prepare for the official IRTA tests in Sepang, Philip Island and Qatar, where at the end of March, Smith and Pol Espargaro will finally launch the team’s official entry into the MotoGP.